Kartik Aaryan and Sara Ali Khan recently wooed their fans with the trailer of their upcoming movie Love Aaj Kal. The duo would be seen in lead roles as a couple who meet and fall in love eventually.

Recently, the makers of the film launched a new song of the movie titled Shayad. The soulful lyrics by Irshad Kamil in Arijit Singh's soothing voice were well-received by the 'SarTik' fans making the song trend on social media.

Kartik Aaryan’s best friend and actor Janhvi Kapoor shared an Instagram story where she appreciated the song by sharing the poster and writing ‘obsessed with the song’. Kartik Aaryan reposted her Instagram story and wrote ‘Welcome to the obsessed club J Ji’.

Janhvi Kapoor and Kartik Aaryan are often seen appreciating each other for their movies and songs. The duo shares a great bond and would also be featured together in the upcoming movie Dostana 2. 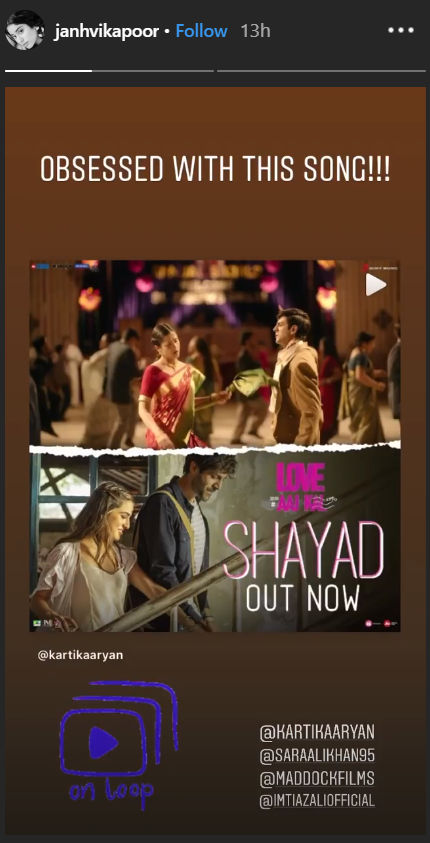 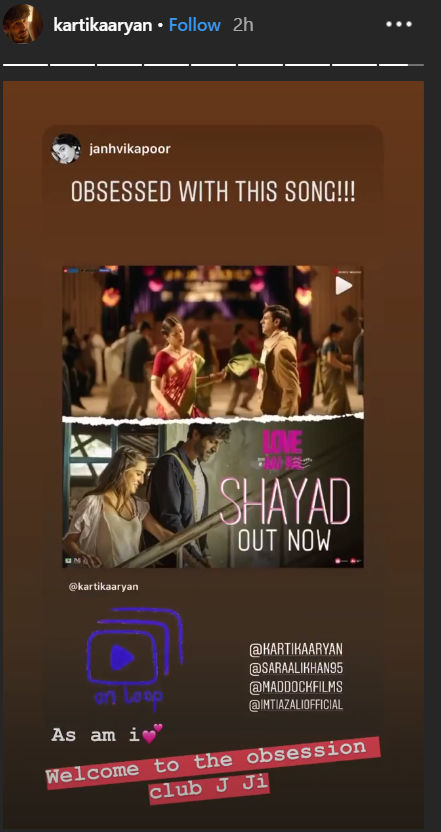 About the song Shayad from Love Aaj Kal

The song sees the trio of Arijit Singh, Irshad Kamil, and Pritam together again. The song is composed by Pritam and lyrics are penned down by Irshad Kamil with singer Arijit Singh lending his voice for the song. The trio is being hailed by fans all over social media for this amazing number. They have given many hits together like Safar, Shayarana, and Hawayein in the past.

The song is an emotional one that shows Kartik Aaryan's love stories from two different times. Arijit with his deep emotional voice gives the song a whole new level of awesomeness. Fans are praising the song and the trio for the wonderful composition on social media. It is another treat for the fans of Irshad, Arijit and Pritam’s trio.