Janhvi Kapoor is gearing up for her next titled ‘Gunjan Saxena: The Kargil Girl’. Take a look at Katrina Kaif's comment on Janhvi's recent 'Kargil Girl' poster

Katrina Kaif is an all-time active member of social media and time and again drops her comments on her fellow friends' pictures. Recently, Janhvi Kapoor took to her social media handle to share the poster of her much-anticipated film, Gunjan Saxena: The Kargil Girl. Through the poster, Janhvi also announced a new release date. While fans rushed to comment on her post, Katrina Kaif also left no stone unturned in joining the bandwagon.

On Monday, Janhvi Kapoor took to her Instagram and shared a new poster of her upcoming flick- Gunjan Saxena: The Kargil Girl.  She called the much-awaited poster 'special' and also announced the new release date to the film. While fans and in huge numbered flooded the comment section, the Bharat star Katrina Kaif also left an endearing comment on Janhvi's post. Katrina Kaif wrote, 'Love', which has sent fans in a tizzy. Take a look.

Also Read | Janhvi Kapoor Comes To The Rescue Of A Paparazzi At The Airport; Watch 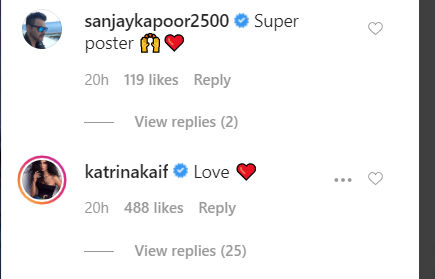 Kapoor's film- Gunjan Saxena: The Kargil Girl, which was earlier slated to release on March 13, 2020, has now got a new release date. The film's release has now got postponed to April 24, 2020. Janhvi's sister Anshula Kapoor also dropped a happy comment on her post. She wrote, 'You're going to kill it'.

In the movie Gunjan Saxena: The Kargil Girl, Janhvi Kapoor will be seen playing the lead role of IAF Pilot Gunjan Saxena - the first female and Indian woman airforce pilot in combat along with Srividya Rajan. Meanwhile, Katrina Kaif is all set to be a part of Rohit Shetty's directorial Sooryavanshi, opposite Akshay Kumar. The movie also stars Ajay Devgn and Ranveer Singh in prominent roles.