This Is How Khushi Kapoor Reacts After She Steals Janhvi Kapoor's Outfits; Watch Video

Khushi Kapoor recently shared a TikTok wherein she revealed that she steals her elder sister Janhvi Kapoor's outfit of the day. Read to watch the video

Amid the nationwide lockdown, Janhvi Kapoor and Khushi Kapoor are making full use of their quarantine time by chilling with each other. From testing their painting skills to enjoying desserts and making TikToks, the Kapoor sisters are indulging in fun activities to keep themselves entertained.

While Janhvi Kapoor has already successfully managed to win millions of hearts across the country with her debut in Bollywood, Khushi Kapoor is still completing her education.

However, Khushi seems to be brushing up her acting skills too as she recently joined TikTok and has been quite frequent with her posts ever since then. In a recent fun TikTok video shared by her, Khushi is seen pretending to not care about Janhvi getting mad at her after she stole her 'outfit of the day'. After her debut on TikTok, Khushi Kapoor's fans are excited to see her on the big screens.

In the TikTok video shared by Khushi Kapoor, she is sporting an off-shoulder lavender sweatshirt with black pants and sunglasses. She captioned the video writing, "Me when my sister yells at me because I stole her outfit of the day." Check out the TikTok below:

However, not so long ago, Janhvi Kapoor had stolen her younger sister's outfit for one of the events, leaving Khushi furious. Later, an infuriated Khushi dm'ed her on Instagram and lashed out at her for the same. Furthermore, the Dhadak actor shared the screenshot of their chat on her Instagram story which gave their fans major sibling goals. 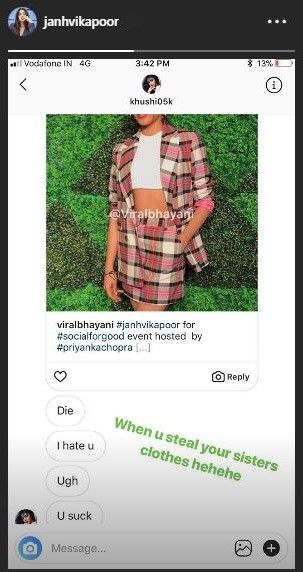