Kirti Kulhari's Fan Spots Her China-made Phone, Actor's Reply To It Is Every Indian Ever

Kirti Kulhari's fan spotted her phone which was 'made in China' and asked her to not use it for the same reason. Read on to know the response of the actor.

Kirti Kulhari has become a popular face in the entertainment industry and has gained huge popularity on social media. The actor keeps updating her social media account with her pictures and keeps her fans updated with her daily life during the lockdown. Kirti Kulhari recently posted a series of pictures on her Instagram handle where she shared with her fans her skincare regime. However, a fan did not care about the skincare tips by the actor and called her out for using a phone ‘made in China’. Kirti Kulhari’s response to it is every Indian ever. Read on to know more about it.

Fan spots 'Made in China' phone

During the lockdown, many celebrities have been sharing their DIY hacks to help their fans cope with these dark times. Similarly, Kirti Kulhari shared her simple DIY skincare regime with her fans during the lockdown. While there were many fans who were praising her for her beauty and looks, there was a fan who pointed out something completely different. He spotted that Kirti Kulkarni was using a phone made in China and wrote in his comments, “Made in China. Don’t use this..” [sic]. Kirti Kulhari responded to it saying, “Ab toh jab tak nahi tootega, tab tak toh yahi hai sir” (now until this one breaks or gets damaged, will be using this one only). Check out the comments below. 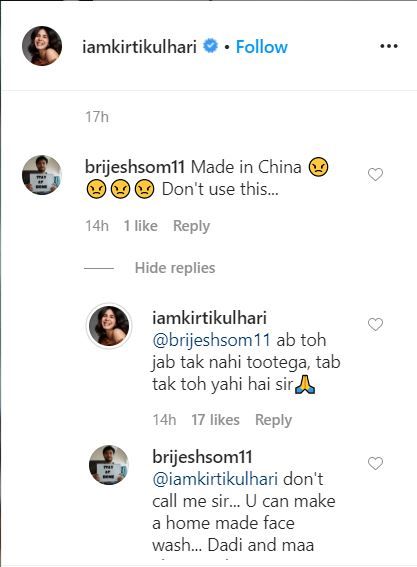 What is Kirti Kulhari up to in her quarantine?

Kirti Kulhari has been doing her bit to keep her fans posted about what she has been doing during the lockdown. The actor has been posting pictures of her diet and other interesting things to keep her fans entertained. She has also been raising awareness about the precautions one needs to take to prevent the spread of the potentially deadly disease.

On the work front, Kirti was recently seen in an Amazon Prime series, Four More Shots Please. The series was about four friends and their bonding with each other. The series portrayed how all four of them were always there for each other. Kirti Kulhari has also been seen in movies like Mission Mangal, Uri: The Surgical Strike, Pink and many more. According to a media portal, the actor will be seen next in Girl on the Train.

Read | Kirti Kulhari On 'Four More Shots Please' Facing Criticism; Says 'we Were Prepared For It'