Kriti Kharbanda has been spending time with her beau Pulkit Samrat amid lockdown. Recently, she shared a picture and it's all about her to-do list post lockdown

Kriti Kharbanda has been enjoying her quarantine period by spending some quality time with beau Pulkit Samrat. From her beau pampering her with good food and hair massages to the actor trying her hand on some new recipes, she is keeping her fans entertained through her social media account. However, this time Kriti Kharbanda raised a concern and it’s all about grooming.

Kriti Kharbanda posted an Instagram story where she raised a concern regarding her personal grooming as she wrote, “Baaki sab toh theek hai, par in eyebrows ka kya karein (Rest is all right, but what does one do about the eyebrows)!". As the national lockdown was extended in the recent past, the salons are closed since a long now and would be closed till the next official announcement. This has caused all the people to try grooming at home. While some ace at it, some still choose to wait. However, Kriti Kharbanda is not the only one who raised this concern, a few days back even Sonam Kapoor posted Instagram stories talking about her eyebrows being a mess. 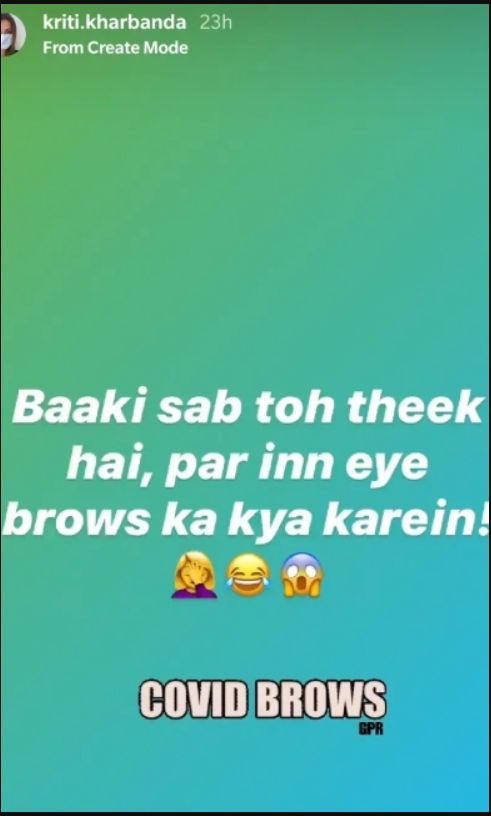 Kriti Kharbanda has undoubtedly carved her niche for herself in the Hindi film industry after predominantly working in the Kannada and Telugu film industries. Kharbanda has shared the screen space with several A-listers of Bollywood including Akshay Kumar, John Abraham, and Kartik Aaryan to name a few. She recently starred alongside an ensemble cast in the Farhad Samji directorial Housefull 4, which went on to become a blockbuster hit at the box office.

For her role in the movie Housefull 4 as Rajkumari Meena, Kriti Kharbanda took training to learn swordsmanship. In her latest '#throwback' Instagram post, she revealed that a lot of people thought that she was too thin and tiny to even carry a sword.  However, the Pagalpanti actor shut all the body-shamers by sharing a video clip from the sets of Housefull 4, flaunting how she aced swordsmanship by reminiscing the 'toughest days at work'.