Maanayata Dutt took to her Instagram to share an old picture from her wedding with Sanjay Dutt. On their anniversary, she wrote a note for the actor.

Maanayata Dutt took to her Instagram to share a picture from her wedding with Sanjay Dutt. While wishing the actor on their anniversary, she penned down a beautiful note. The caption of the post reads, "Another year of fully accepting the dark and the light within each other...another year of holding on together......happy anniversary to my best grip in this world [hear emoji]." The comment section is filled with anniversary wishes and heart emoticons. Check it out. 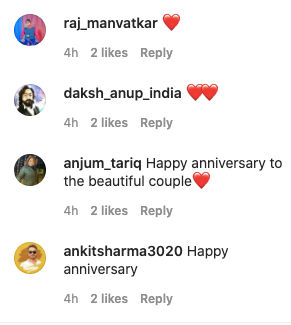 Earlier, she shared a picture with the actor and in the caption, she wrote a note about him. In the picture, Sanjay Dutt is seen wearing a black full sleeves tee shirt with cargo pants and Maanayata is seen wearing a yellow printed dress and high heels. The caption reads, "And how do you survive what you have been given to bear. You keep putting one foot in front of the other and you keep walking....walking together in life [heart emoticon]." Check it out.

And how do you survive what you have been given to bear. You keep putting one foot in front of the other and you keep walking....walking together in lifeâ¤ï¸â¤ï¸ #love #grace #positivity #dutts #beautifulllife #thankyougod ðŸ™

As per Bollywoodshaadis.com, Sanjay Dutt met Maanayata, formerly known as Dilnawaz Shaikh, while he was seeing a junior artist. The former actor used to cook for Sanjay and often show up on sets to be with him. The couple got married on February 7, 2008, after two years of courtship. After two years of their marriage, they welcomed twins, son Shahraan and a girl named Iqra. The former actor is often seen sharing pictures of her children on Instagram. Check out.

In a sad turn of events, Sanjay Dutt was diagnosed with lung cancer in August 2020. Since then, he was undergoing treatment and also recovered within months. On the work front, Sanjay Dutt will be next seen in the sequel of KGF Chapter 1, where he will play the role of an antagonist. A few weeks ago, he took to his Instagram to share the look of his character.

Also Read: 'Got pumped': Sanjay Dutt's first reaction on hearing about his role in 'K.G.F: Chapter 2'