Amid the lockdown, Money Heist has been one series that the viewers have been lapping up. Even celebrities from the film industry have expressed their admiration for the show, sharing memes and posts on it. The character that has caught the fascination of the film stars in particular has been the Professor.

READ: Netizens Disapprove Of Kartik Aaryan's Comparison To The Professor From 'Money Heist'

Ayushmann Khurrana did not hesitate in asking filmmakers to cast him in a role like that of the Professor, and even wore the glasses and played the popular Bella Ciao on the piano. Though Kartik Aryan did not announce he was recreating the look, but the actor wearing similar glasses naturally made netizens compare it to the popular character.

The latest to join the bandwagon was Annup Sonii. Though not exactly the same glasses, the actor managed to get the beard right as he shared the collage of the two. The Crime Patrol star shared the lyrics of Kishore Kumar’s iconic track Kuch Toh Log Kahenge to state that ‘people will say something, that is their job’ while sharing the look.

READ:Netflix' Reply To Ayushmann Wishing To Play 'Professor' From 'Money Heist' Is Unmissable

Netizens, however, were impressed and felt he nailed the look completely. One netizen termed it ‘perfect’, another called it as a ‘copy’, ‘very close’ and emojis galore were also a part of the comments section.  Even his actor-wife Juuhi gave a thumbs up. 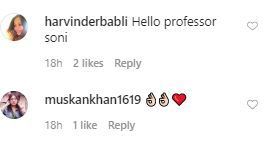 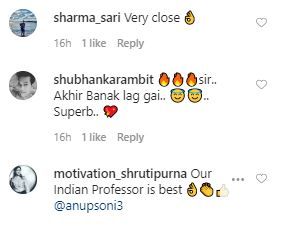 The role of the Professor is played by Alvaro Morte in the Spanish thriller series. Money Heist traces the twists and turns amid the heists planned by the Professor. The fourth part of the series, or season two, aired on April 3, is the most-watched series on Netflix, at the moment, toppling Tiger King.

PEOPLE HAVE PLEDGED SO FAR
LATEST NEWS
View all
8 mins ago
Happy Birthday Paresh Rawal: Check out some popular dialogues of the actor from his films
1 hour ago
Hina Khan's 'quarantine routine' all about working out and reminiscing good old days
1 hour ago
Priyanka Chopra is 'feeling adventurous' as she shares a sun-kissed selfie
3 hours ago
Ekta Kapoor describes her favourite complex character from 'Kehne Ko Humsafar Hai'
17 mins ago
Parineeti Chopra expresses excitement for 'FRIENDS' cookbook on IG; gives shoutout to fans