Arjun Kapoor received virtual love from Sonam Kapoor, as he got emotional and shared a heartwarming message through a video on Mother's Day 2020. Read on

Bollywood celebrated Mother's Day with utmost grace at home during the COVID-19 lockdown. Social media was flooded with posts of several stars doing a bit for their moms amid quarantine. Amidst the celebrations, Arjun's emotional video about recalling his mother touched Sonam Kapoor's heart. The Saawariya actor took to her Instagram and reposted his clip with a heartwarming caption, sending virtual love for Arjun Check out.

As soon as Arjun Kapoor's emotional clip flared all over the internet, Sonam Kapoor took to her Instagram story and reposted the former's video. She sent virtual love to Arjun who missed his mom a little too much on Mother's Day. Sonam K Ahuja's caption to  the story read, "Love you a lot, Arjun."

Also Read | Sonam Kapoor Shares Beautiful Pic On Instagram, Says 'I Want To Fly Out In The Sky' 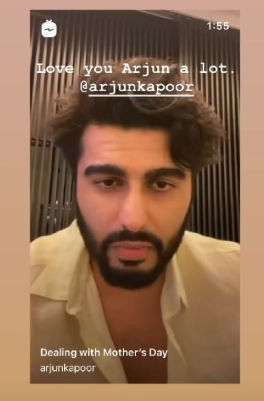 For the unversed, the Panipat actor Arjun Kapoor had a little weird and emotional day as it reminded him of his mother, Mona Shourie, who passed away eight years ago- days before the release of his debut film. After Mother's Day almost came to an end, Arjun Kapoor took to his Instagram and outpoured his emotions through a video. While he wished 'all the amazing souls out' there a Happy Mother's Day, Arjun Kapoor also spoke about how he feels nice to see so many people who love their mother, but it is bittersweet for somebody like him who would want to say it but can't.

In the video, Arjun Kapoor also expressed that he wanted to put the clip because a lot of people are without their parents right now in lockdown. Kapoor said, "The relationships that we all crave, they're there within us and around us, but we need Mother's Day, Father's Day, Brother's Day, Sister's Day to realise it." The Gunday actor held back his tears and thanked all the mothers out there.

Later on, the Half Girlfriend actor also shared a status update with a throwback photo of his late mother Mona Shourie. In the picture, Arjun Kapoor can be seen in his pre-Bollywood plumpy look, with chubby cheeks. He penned down a heartening caption too. "She's always got my back, even with my golu cheeks (which now my beard hides)," wrote Kapoor. 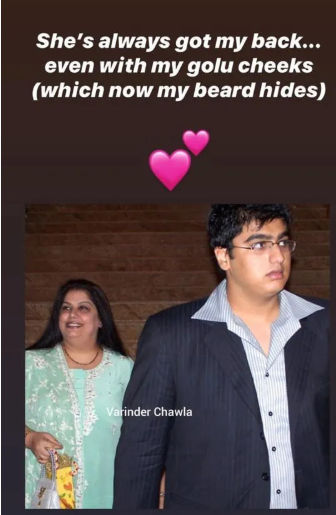 PEOPLE HAVE PLEDGED SO FAR
LATEST NEWS
View all
9 hours ago
Malaika Arora's stylish house where she is under quarantine with son Arhaan; See pics here
9 hours ago
Anurag Kashyap gets nostalgic after watching his pic with cast of his first film 'Paanch'
9 hours ago
Maanvi Gagroo receives apology from the fashion brand that used her pic & body shamed her
10 hours ago
Ali Fazal leaves an adorable comment on Richa Chadha's new profile picture
7 hours ago
Shraddha Kapoor shares a funny 'Stree' style poster that shows how to keep COVID at bay