The Family Man actor Neeraj Madhav and Deepthi Janardhan have gone the family way as the couple welcomes a baby girl. Read more to know about it.

The Family Man actor Neeraj Madhav has truly become a family man now. The actor recently took to his official Instagram handle and shared with everyone that he has welcomed a baby girl with his wife Deepthi Janardhan. The South Indian actor shared the arrival of a new member of his family through his social media pages. For all the people who are wondering about Neeraj Madhav and Deepthi Janardhan’s baby, here is everything you need to know about it.

Neeraj Madhav took to his official Instagram handle and shared a picture with his wife Deepthi Janardhan to share the news with his 2.3 million-strong Instagram family. In the picture, Neeraj Madhav is seen posing with Deepthi Janardhan while holding a pink balloon in his hand that has ‘It’s a GIRL’ written on it. He captioned the picture as “We’re blessed with a baby girl !! â¤ï¸” The focus in the picture is on the balloon while the new parents can be seen blurred in the background. Here is a look at Neeraj Madhav's Instagram post.

Also Read | 'The Family Man' Season 2 To Hit OTT This Summer; Makers Say 'You Will Love It'

As soon as he shared the exciting news on his social media, wishes started to pour in for the actor from various celebrities as well as netizens. South Indian actor Tovino Thomas congratulated the couple by saying, “Congratulations Neeraj and Deepthi !!!ðŸ¤—ðŸ¤—” while his The Family Man co-star Priya Mani Raj commented, “Congrats â¤ï¸â¤ï¸”. Another The Family Man co-star Shreya Dhanwanthary could not hold back her excitement as she commented, “Oh my gaaad!!! Congratulations!!!! Omg! OMG!!” Various other celebrities like Zayn Khan, Reba John, Nikolay Timoshchuck Jr, Aju Varghese, Siddharth Menon, Pearle Maaney, Sharib Hashmi congratulated the actor. Here is a look at some of the comments on Neeraj Madhav's Instagram post. 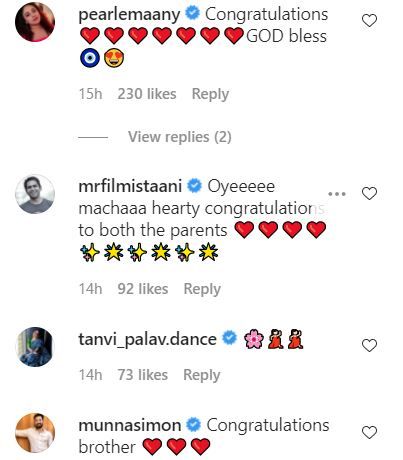 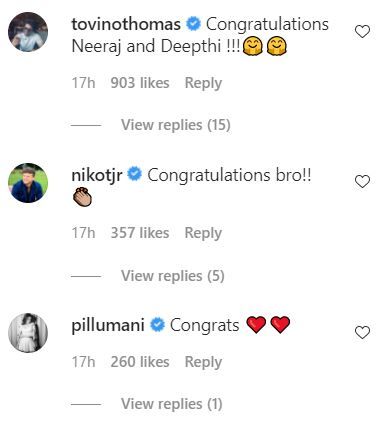 Neeraj Madhav and Deepthi Janardhan had tied the knot in 2018. The actor regularly shares adorable pictures with his wife on his social media. The couple celebrated their second anniversary on April 2, 2020. Neeraj Madhav has been a part of the South Indian film industry since 2013. He made his debut with the Malayalam movie Buddy and went on to appear in several hit movies like Oru Vadakkan Selfie, Jamna Pyari, Kunjiramayanam, Charlie, Adi Kapyare Kootamani, Paippin Chuvattile Pranayam among others. He became a household name with his portrayal of the main antagonist Moosa Rehman in The Family Man. The second season of the series is all set to be released soon.