Neha Dhupia took to her Instagram to share a picture with Mehr. While she is being her natural self, her fan asked a question about her streak of white hair.

Neha Dhupia recently shared a picture with her daughter Mehr on her Instagram. In the picture, the mother-daughter duo can be seen enjoying a day off at the beach. The actor is wearing a red and white stripe monokini while holding her daughter and kissing her on the forehead. She is flaunting a streak of white hair. With the sunset in the background, Neha added the caption, "Magic hour". Her comment section is filled with her fans questioning about her white hair.

Also Read: Neha Dhupia illustrates the 'many moods' of the last vote out on Roadies Revolution 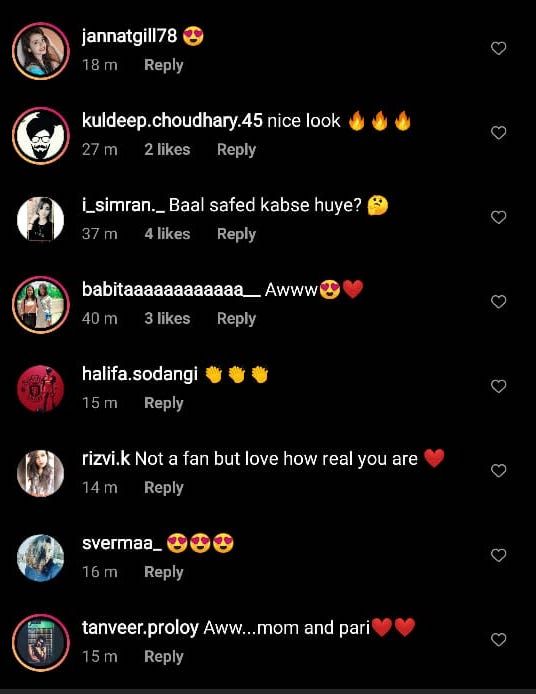 Neha Dhupia is quite active on social media. Earlier on New Year's Eve, she shared a picture with her husband Angad Bedi and daughter Mehr Dhupia Bedi while standing on the beach. She added her thoughts in the caption, which reads, "Goodbye  #2020 you got us so close to fear that you taught us how to love without fear ...". Check it out.

It looks like Neha Dhupia's daughter Mehr Dhupia Bedi is a beach 'baby'. While celebrating Mehr's 2nd birthday, Neha Dhupia and Angad Bedi took her out for a little beach vacation. The actor uploaded a picture on her Instagram and wrote a note about her daughter. In the picture, the trio is seen taking a walk while enjoying a beautiful sunset on the beach. Check it out.

Neha Dhupia started her career in 2003 film Qayamat: City Under Threat. She has various movies under her belt like Kya Kool Hai Hum, Julie, Garam Masala Shootout at Lokhandwala and more. Currently, she has been appearing as a judge for MTV Roadies and also runs a Bollywood podcast named #NoFilterNeha, where she interviews celebrities. Neha Dhupia and Angad Bedi dated for a few years before getting married on May 10, 2018. Neha gave birth to Mehr on November 18, 2018.

Also Read: Neha Dhupia and Angad Bedi's “by far the best weekend of 2020”