Nora Fatehi's 'Pooja, What Is This Behaviour?' Rendition Leaves Her Fans In Splits

Nora Fatehi posted a video on her Instagram of a TikTok video where she can be seen lip-syncing to a famous Bigg Boss feud "Pooja, what is this behaviour?"

Nora Fatehi seems to be very well-versed in the art of keeping her fans entertained. The dancer and actor is using her TikTok account and has been enacting some interesting and funny videos, posting them later on her Instagram. A recent one is one of the most famous memes of social media, the clipping of Bigg Boss named ‘Pooja what is this behaviour’.

Nora Fatehi at her TikTok best

Nora Fatehi took to Instagram to share the TikTok of ‘Pooja what is this behaviour’. She can be seen playing two characters, one wearing a denim shirt and the other in a black Ganji. The actor perfectly lip-syncs with the dialogues of both the characters in the clipping. In the caption, Nora wrote how quarantine has led to anger:

She received a large number of praises in the comments section. A fan called the video ‘Superb’, while the other laughed and said it was ‘too good’. A fan pointed out her attitude in the video, appreciating the way she did the parts. 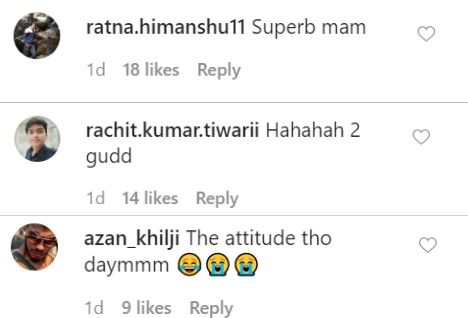 Nora Fatehi has been garnering a large number of views and also appreciation through her TikTok videos. After posting the ‘Pooja what is this behaviour’ video, she uploaded another TikTok. In the TikTok, she can be seen lip-syncing to a girl’s voice. She says that girls are making videos on Instagram calling good-looking guys as ‘boo’ and claiming them as their love. She then added that there is no point to it since these girls will end up marrying Ramesh of their neighbourhood. Then, turning shy, she said that even she has a Ramesh. She then enacts like she has to go meet him. Here is the video. In the caption, she added that Ramesh thinks she is doing too much:

ALSO READ | Nora Fatehi reveals how things escalate when in quarantine for too long; watch video

Nora Fatehi also amazingly showed a hilarious give and take between herself and coronavirus. She asks coronavirus what was the reason behind it spreading so much worldwide. Coronavirus says that it does not have to explain to her while Nora as herself screams at coronavirus asking “What was the reason?”. In the caption, Nora said that she confronted coronavirus who just has an attitude but no answers. Here is the video:

On the work front, Nora Fatehi was last seen in the movie Street Dancer 3D. She starred alongside Shraddha Kapoor and Varun Dhawan, while the movie also had Aparshakti Khurana and Prabhu Deva. It was directed by Remo D’Souza.