Bollywood's diva, Nushrat Bharucha seems to be enjoying her quarantine period at home while trying her hands on some new dishes as she makes a aaloo paratha.

Bollywood's diva, Nushrat Bharucha seems to be enjoying her quarantine period at home while trying her hands on some new dishes. The actress who is fond of cooking during her self isolation period seems to be making new dishes every day. Nushrat shared a video on her social media where the Dream Girl actress can be seen flipping and cooking Aaalo Parathas which is giving major cooking vibes.

Nushrat shared a video on her Instagram story where she can be seen flipping and tossing the paratha on the Tava. Apart from that she also shows her happy face which turned out to be a result of good cooking. Nushrat captioned the video as " Aaloo Paratha Day." Apart from this, Nushrat was earlier trying really hard to brace her cooking skills. The actress who is active on social media treats fans with several pictures and videos of her cooking skills. The actress who is spending her quarantine period with family in Mumbai was trying to learn the art of making round rotis as well. 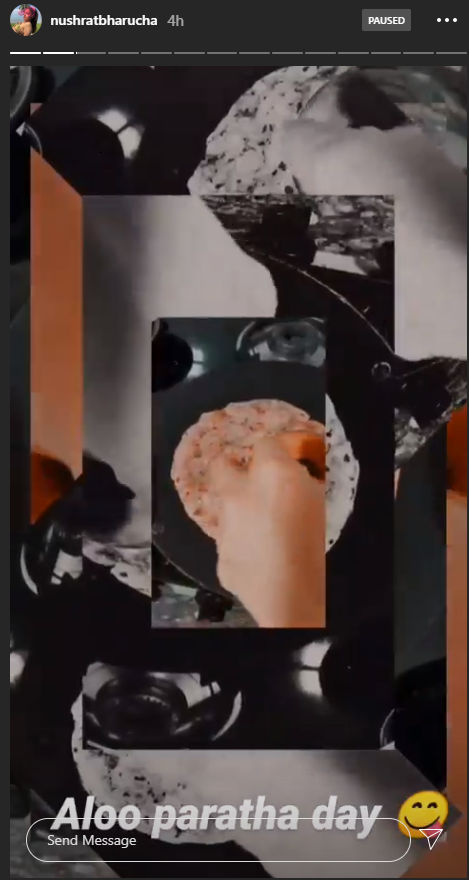 Sometime back the actress shared a video on her Instagram story and showed how she was finding it difficult to make round rotis.  In the video, Nushrat shared how she is struggling hard to make round shape rotis at home. She compared the de-shaped rotis that she made with bad hair days. In the caption, she wrote, "Bad hair days to Bad roti days." In the second picture, Nushrat seems to get exhausted after trying her hands on making round roti. In the snap, she can be seen keeping her hands on her forehead with a crying face. She captioned the picture with a turtle emoticon and wrote, "Struggling." Meanwhile, on the work front, Nushrat Bharucha is currently, gearing up for her next film Chhalaang. Here, Nushrat will share the screen space with Rajkummar Rao. The sports-drama will hit the theatres on June 12, 2020.

Read: Nushrat Bharucha's Photos With Her Friends From The Industry

PEOPLE HAVE PLEDGED SO FAR
LATEST NEWS
View all
59 mins ago
Deepika padukone reveals she was born in denmark, here're other interesting details
3 mins ago
Suchitra krishnamoorthi gets con call claiming she 'won a car', lodges police complaint
1 hour ago
Kartik aaryan spills the beans about 'dostana 2', says it will 'push the envelope'
1 hour ago
Shraddha-siddhanth kapoor set out for 'groceries adventure', can't contain excitement
21 mins ago
Amitabh bachchan films where his reel character faces heart-wrenching death