Parineeti Chopra recently posted a view from her home. In the picture, fans observed the placement of a Buddha idol that caused disappointment among her fans.

Parineeti Chopra is one of the renowned actors in Bollywood with several hits to her name. The actor is known for her incredible acting capabilities and her hit films. She is also looked upon as a fashion and fitness icon due to her discipline towards fitness and her unique fashion sense as well. The actor was last seen in Kesari which was a tremendous success.

Also Read | From Varun To Parineeti Chopra, Take A Look At Shraddha Kapoor's Friends From Bollywood

Recently, the actor posted a picture on Instagram that showed the serene view from her home. Parineeti posted the picture with a caption stating that she is enjoying the quiet atmosphere. This was due to the self-isolation observed by the citizens as requested by the honourable Prime Minister of India. Several citizens kept themselves quarantined to combat the spread of the Coronavirus.

Also Read |  Parineeti Chopra Wishes She Was Quarantined In Her Beautiful Ambala Home; Here's Why

In the picture shared by Parineeti Chopra, fans observed a plant in her balcony. Just below the plant, fans spotted a small Buddha statue. Some fans did not like this gesture or rather the placement of the religious figure. They made their disapproval known in the comments section. Some fans even expressed their disappointment with the actions by Parineeti, for placing the idol on the floor. 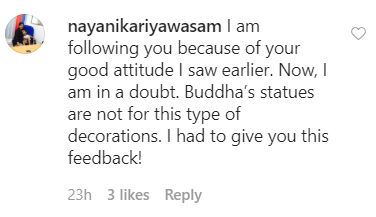 Several celebrities came forward to address the issue of self-isolation with their fans. Parineeti herself on many occasions has urged her fans to stay indoors. Parineeti Chopra had put up various measures and posts from various sources highlighting the seriousness of the virus to her fans. The picture posted by Parineeti, however, got quite a lot of criticism from some followers on her page.

PEOPLE HAVE PLEDGED SO FAR
Anupam Kher advices on how to be mentally strong amid the COVID-19 Lockdown
Kareena Kapoor Khan channels her inner diva as she 'works from home' post amid lock down
Hrithik ties up with NGO to provide 1.2 lakh meals for daily wage earners, senior citizens
Malaika Arora & her squad prove friends who workout together stay together | See pics
Rangoli Chandel causes stir by calling Taj Mahal a 'grave' rather than a 'Symbol of Love'
DO NOT MISS
COVID: LALU YADAV TO REMAIN IN JAIL
COVID-19: UK BASED DOCTOR ON PPE
TRUMP TEARS INTO CHINA-CENTRIC WHO
DORSEY PLEDGES $1 BILLION
CONG SINGHVI ON COVID-19 LOCKDOWN
PIERS MORGAN: WHO IS RUNNING UK?