Priyanka Chopra and Nick Jonas celebrated their first Holi together at Isha Ambani and Anand Piramal's residence. Look at the pictures below-

READ:  Priyanka Chopra And Nick Jonas Give Paparazzi Cheeky Smiles As They Call Out To 'Nick Sir'

For the occasion, Priyanka and Nick decided to don cordinated traditional attire. The actress was seen wearing a beautiful off-white ethnic outfit embroidered with multi-colored neon design and strappy heels while Nick wore a kurta and pajama which also featured neon embroidery at the borders.

In one of the pictures shared on social media, Nick is seen looking into the eye of his lady love - Priyanka Chopra. In another picture Nick, Priyanka and actor Katrina Kaif are seen posing for the camera.

In the short selfie video, Nick can be seen giving a glimpse of the star-studded bash to his followers on Instagram. "My first Holi! (Five days early) So much fun celebrating with such incredible people here in my second home in India. #holi," he captioned the picture. 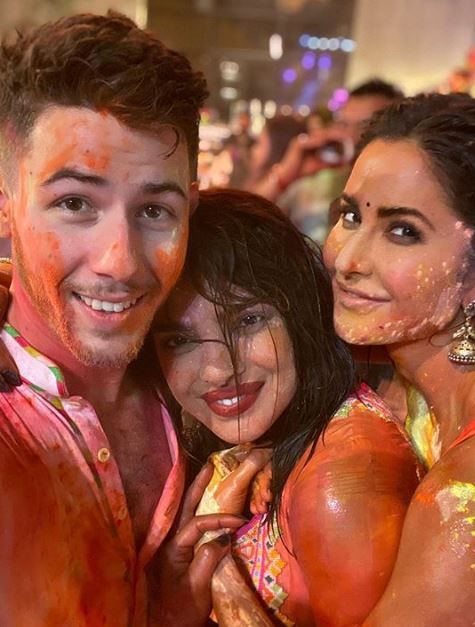 Last year on Diwali, Priyanka celebrated the festival of lights with Nick in their California home. The two took to social media to share pictures and wish their fans. Priyanka Chopra and Nick Jonas tied the knot in December 2018. The extravagant wedding was attended by the friends and family of the two actors.