Priyanka Chopra-Nick Jonas' new pet Gino was warned by 'elder sibling' Diana as they started living together. The former has a bigger following on Instagram.

Priyanka Chopra’s pet Diana is among the most popular pets in the world. The dog often draws eyeballs on her despite she being in the arms of the ‘Desi Girl’. Diana has an Instagram handle of her own, and her fun-filled acts are viewed by over 1 lakh followers. However, will she be any less pampered or will the love of her family members towards her reduce in any way with another pet joining the Chopra-Jonas household? As Peecee and husband Nick Jonas welcomed Gino, Diana was keen to show who was the ‘elder sibling’ as she showed him around the house. Though Gino termed her as ‘sweet’, he too is also a social media sensation with over 258K followers already.

The ‘Diaries of Diana’ page is one of the most interesting pages one would find on Instagram, as it displays the various adventures of Priyanka Chopra’s pet. As the actor gifted Nick Jonas another puppy ahead of their first wedding anniversary, the handle posted a quirky video. In the video, Diana is playing with something, but as Gino comes towards her, she warns him not to do so, and charges at him, not once but twice as the younger one runs into the room.

The handle captioned the video, “Hey kiddo! Just wanted to show you around the house and remind you who’s the older one! 😜#OlderSiblingsRule @ginothegerman @nickjonas @priyankachopra.” Gino, however, was thankful, writing on his handle, “Big sis showing me around the new house. She’s so fwendly!! @diariesofdiana.” We wonder if he behaved so for having a bigger following, 258K to Diana’s 132K followers. Even Priyanka Chopra laughed at the unusual bonding of her pets. 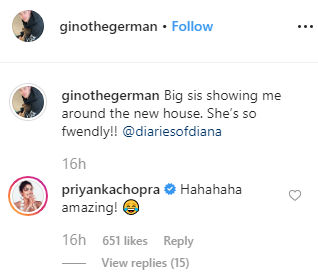 READ:Priyanka Chopra Says, She Will Never Dare To Sing A Duet With Nick Jonas; Know Why

The arrival of Gino had made headlines. Nick had shared a video where he is woken up by Priyanka and the ‘gift’. He had then written, “Pri came home with the absolute best surprise this morning. Please meet our new pup @ginothegerman I haven’t stopped smiling since I woke up this morning and finally realized what was going on. Thank you @priyankachopra ❤️ 🐕.” Priyanka had then replied, “Happy almost anniversary babu 😍 ur face..hilarious 😂.” Priyanka Chopra and Nick Jonas will be celebrating their first anniversary on December 1.