Recently, actor Radhika Apte shared quirky photos from the streets of London. One of her fans asked the rate of coriander as she was posing with it. Check out.

Recently, Bollywood actor Radhika Apte shared quirky BTS pictures of her latest cover shoot. Radhika was seen carrying a half-cut watermelon and a bunch of coriander leaves. One of her fans in the comments section added a pinch of humour to her picture as he asked the rate of coriander.

Interestingly, Radhika Apte looked gorgeous in a yellow dress teamed with a pair of white shoes. To style her middle parting hair she tied a loose ponytail. The minimal makeup and red lips complimented her overall attire. Giving summer vibes to her fans, she added a few hashtags such as #midstofwork, #londonstreets, #summer and #rawimages, among many others. She is seen posing with an all-smiling face while sitting at a corner of a street. The photo garnered more than 200k likes and hundreds of comments within a few hours. Check out her photo below before knowing what her fans have to say about it.

Talking about the reaction of her fans, a section of her fans went gaga over her looks, while a few started asking her the rate of vegetables in the comments section. One of the comments red, '5 rupaye ka dhaniya Dena tai..... Ar voh watermelon kitne ka diya?' Another user wrote, 'aye sabji pack me some aalu '. Meanwhile, another user asked a question that read, 'Dhaniya kya rate hai?' Check out reactions below: 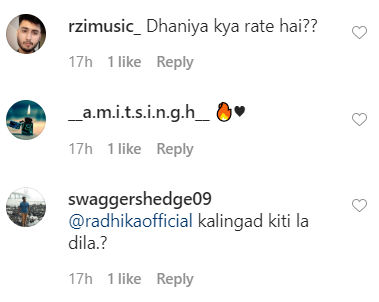 What's next for Radhika Apte?

On the professional front, the Sacred Games actor was last seen in the film Liberte: A Call to Spy based on the beginning of World War II. The film also featured Sarah Meghan Thomas who also wrote the script, with Stana Katic, Linus Roache, Rossif Sutherland, among many others. Oscar-nominated filmmaker Lydia Dean Pilcher donned the director's hat.

In addition, Radhika Apte was all set to play the lead in the television series Shantaram before the Coronavirus pandemic. The series is based on Gregory David Roberts' best selling novel of the same name. Apart from her international stint and TV series, she will be next seen in Raat Akeli Hai, opposite her Manjhi: The Mountain Man co-star Nawazuddin Siddiqui. Reportedly, the shooting was wrapped in April 2019. It is speculated that the crime thriller will take an OTT release.