Rajkummar Rao shared a video of him and Patralekha trying cute one-liners on each other ahead of Valentine's Day. Read ahead to know more.

Rajkummar Rao and Patralekha often share their adorable photos on their social media handles and set major couple goals for fans. Ahead of Valentine's Day, Rajkummar Rao took to Instagram to share a fun video wherein he and Patralekha are trying cheesiest one-liners on each other. Scroll to see the video and know more.

Rajkummar Rao and Patralekha try one-liners on each other

In the video shared by Rajkummar, he starts the fun game by asking Patralekha, "Why doesn't he like the alphabet Q?" When Patralekha asks him why, he replies, "Because it comes between P (Patralekha's initial) and R (Rajkummar's initial) and I don't like anything that comes between us". The next one-liner is said by Patralekha who asks Rajkummar, "Are you wifi? Because I can feel the connection". Further ahead in the video, Rajkummar asks Patralekha to pinch him and says, "Because you are a dream to me. You are the queen of my dreams and I the king of yours".

The video garnered a lot of love from their fans and followers as it hit 80K likes within two hours of uploading. Several fans have praised their chemistry by commenting using the fire and red heart emojis. and even called them the 'best couple'. See their reactions below: 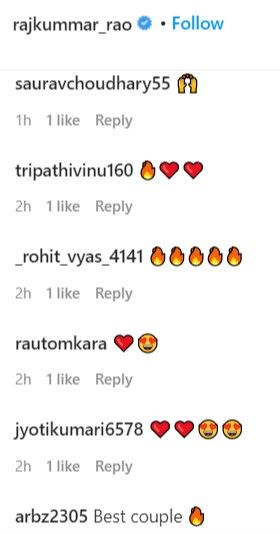 The couple has been together for eight years now. Speaking to Humans Of Bombay, Patralekha said that she first saw Rajkummar in the movie LSD and he was like the weird guy he had played on-screen. His image in her mind was already tarnished. On the contrary, Rajkummar later told her that he had seen her in a commercial and decided to marry her. She said that when they started working together it was then she realised that he was an extremely passionate person. She added that being together is what matters and they don't know what the future holds for them. They were seen together in the 2014 drama film Citylights. The movie was directed by Hansal Mehta. Rajkummar is currently is shooting for his next film Badhai Do which also stars Bhumi Pednekar. The film is the second part of the 2018 drama-comedy film Badhai Ho. It is directed by Harshavardhan Kulkarni.