Rajkummar Rao Recently Shed Some 'extra Weight' But It's Not What You Think; Read Here

Amid the Coronavirus outbreak, Bollywood celebrities have been encouraging their fans to stay at home during this crisis and make the most of the quarantine period. During this time, social media has played an important role as the actors are able to reach out to their fans and keep them entertained. Recently, Made in China actor Rajkummar Rao revealed in his recent Instagram video that he shed some extra weight this summer.

Also Read: With Rajkummar Rao As Sheldon Cooper, Here Is A Look At 'The Big Bang Theory' Indian Cast

Also Read: Bhumi Pednekar's 'Badhaai Do': What To Expect From Her Upcoming Film With Rajkummar Rao?

Here is a look at the picture that Rajkummar Rao shared 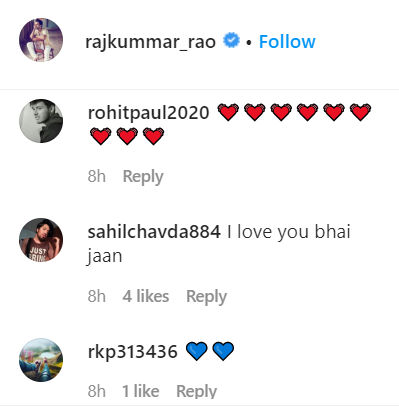 Some time ago, Rajkummar Rao also shared a picture of himself to thank Mumbai Police for their services. The Shaadi Mein Zaroor Aana actor took to his Twitter account to share a picture where he is holding a paper that has #DilSeThankYou written on it. Here is a look at Rajkummar Rao's post below.

Also Read: Nushrat Bharucha In 'Chhalaang': What To Expect From Her Next With Rajkummar Rao

PEOPLE HAVE PLEDGED SO FAR
LATEST NEWS
View all
28 mins ago
Arjun Rampal's son Arik checking temperature outside in this pic is too cute to miss
2 hours ago
Nushrat Bharucha or Kriti Kharbanda: Whose green checkered outfit style do fans love more?
1 hour ago
Parineeti Chopra-inspired outfits that can be tried at various events
5 mins ago
Akshay Kumar's Net Worth: The 'Only Indian Actor' on Forbes' highest paid celebs list 2020
55 mins ago
World Environment Day: Kalki Koechlin urges fans to take care of water bodies; See post