Ranbir Kapoor Or Shaheen Bhatt, Who Is The One Behind Alia Bhatt's Haircut?

Ranbir Kapoor could be the one that helped Alia Bhatt get the wonderful haircut that she showed off in a selfie recently. Or is it Shaheen Bhatt? Fans react.

Alia Bhatt caught the attention of her fans when she posted a recent picture of herself sitting down on what looks like a gym floor, showing off her new haircut. The actor thanked her ‘multitalented’ loved one for rising to the occasion and giving her the haircut. The internet flooded with speculations as to who can it be, and some netizens have a theory that it is Ranbir Kapoor.

ALSO READ | Vicky Kaushal to Alia Bhatt: Here's what your favourite stars did over the weekend

Alia’s post on Instagram sparked a lot of confusion and curiosity in the minds of her fans and followers. They all wanted to know who was Alia’s multitalented one and hence started with their guesswork on his comments section. One comment asked, ‘Ranbir ne kiya hai na’, while the other claimed that they really wanted to know more about her ‘multitalented’ one. Comments flooded on Alia’s post as fans started commenting about Ranbir possibly being the one who helped Alia with her haircut. A fan asked Alia to ask Ranbir to give her a haircut as well. Another fan asked Alia if it was indeed Ranbir who is the multitalented one. 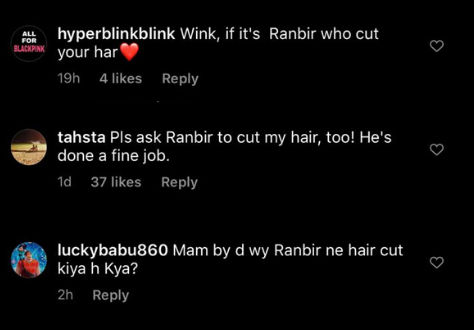 Many people suggested that it could be Alia Bhatt’s sister and writer Shaheen Bhatt. They assumed that Alia is talking about Shaheen and that she was the one who cut her hair. Shaheen and Alia are very close and thus this was a good guess for fans.

A bunch of fans were determined to guess that it was Ranbir Kapoor who helped Alia with a ‘chop-chop’, as said by the actor. The picture taken by Alia shows some gym equipment in its background. As per a news source, the room seems to be the personal gym of Ranbir himself. The source also says that there were rumours that Alia is staying with Ranbir in his plush house.

The news of Ranbir Kapoor and Alia Bhatt dating each other surfaced in the year 2018. They made an appearance together at Sonam Kapoor and Anand Ahuja’s wedding together and it was almost as if they made it official. At the Zee Cine Awards of 2019, Alia and Ranbir shared a lot of romantic and intimate moments, which confirmed their affection for each other. Since then, Alia has been a rock for Ranbir as he went through a hard phase of his life. His father and actor Rishi Kapoor recently passed away.

The couple will be sharing the screen for the first time in the upcoming movie Brahmastra. The two will star alongside Amitabh Bachchan. It will be released in December 2020.

PEOPLE HAVE PLEDGED SO FAR
LATEST NEWS
View all
42 mins ago
Akshay kumar, virat kohli unite for video tribute to frontline workers: 'you are real heroes'
1 hour ago
Kareena kapoor khan or jennifer lopez: who aced the silver mirror work outfit like a diva?
52 mins ago
5 alia bhatt starrers that were made on low-budget, but earned exceedingly well at bo
1 hour ago
Inaaya naumi kemmu wishes kunal kemmu, writes "best papa ever hands down"
13 mins ago
Surbhi jyoti and hina khan in white ethnic suits; see pics inside