Rangoli Chandel's Wikipedia page was recently edited by an anonymous user who described her as 'starves for attention' after her getting banned from Twitter.

Rangoli Chandel is evidently the one to not stay silent and voice her opinions on social media platforms. She recently made a few comments through her Twitter which resulted in her facing a ban. Now, Kangana Ranaut's sister Rangoli Chandel's Wikipedia page has been edited by an anonymous user who has described her to be 'starved' for attention. Check it out below -

The Wikipedia description looks like an attempt of encompassing Rangoli Chandel's behaviour on social media which has brought upon various controversies. Her recent tweet in the light of a horrific incident where stones were hurled on medical professionals was deemed to be extremely insensitive by many Twitter users. Her account was later banned from Twitter which was also applauded by many netizens. Check out the tweet which got Rangoli Chandel suspended below - 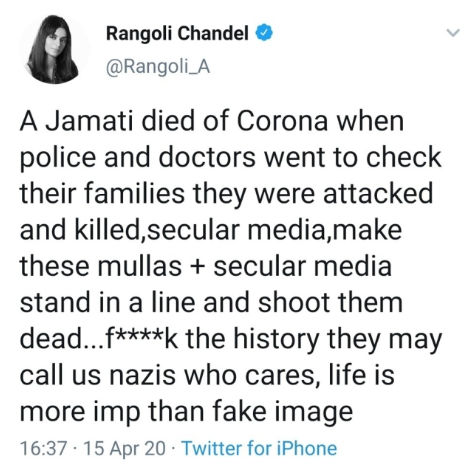 Rangoli has now come forward and stated her side of the story completely. She stood tall on her opinion and did not retract the statements made by her in the tweet. Check out Rangoli Chandel's views below -

Twitter is an American platform absolutely biased and anti India, you can make fun of Hindu Gods call Prime Minister and Home Minister terrorists but if you say anything about people pelting stones on health workers and Police forces they suspend your account, I have no desire of empowering any such platforms with my perspective and honest opinions, so I am not reviving my account, I was my sisters spokes person now watch out for her direct interviews, she is a huge star she has many ways of reaching out , a biased platform can be easily avoided.