Ranveer Singh recently dropped a quirky comment on Arjun Kapoor's Instagram post where he was seen working out using battle ropes. Read below for more details.

Ranveer Singh and Arjun Kapoor are known to show affection for each other from time to time. The duo has been vocal about their friendship and shown support for one another whenever requires. Being avid social media users, Arjun Kapoor and Ranveer Singh are also seen indulging in funny banters on Twitter and Instagram. Now, Arjun Kapoor posted a work out the video which was followed by Ranveer Singh's quirky comment.

Also read: Ranveer Singh asked by netizens when he is giving them the 'Good News' 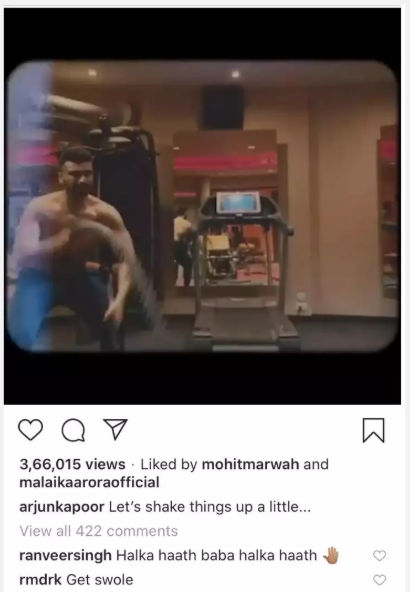 Also read: 'Ranveer Singh is full of life', says Kapil Dev on his bonding with the '83 star

Arjun shared a video from his rigorous work out session where he could be seen practising with battle ropes. The actor can be seen committing to his form as he works his way through the tiresome work out session. Ranveer Singh posted a comment advising Arjun Kapoor to go easy on the workout and suggested him to use a lighter hand while using battle ropes.

Arjun Kapoor recently featured in Panipat: The Great Betrayal which failed to create wonders at the box office, but earned Arjun Kapoor a lot of praise for his performance. Ranveer Singh, on the other hand, is going to have a busy 2020 with multiple films lined up for the actor. He is currently shooting '83 which will be a biopic based on the life of Kapil Dev. he will also make a cameo in the Akshay Kumar starrer Sooryavanshi where he will reprise the role of Sangram Bhalerao aka Simmba.