Ranveer Singh has been an active user of social media. He recently bombarded Sunil Chhetri and Virat Kohli's Instagram live stream with his funny comments.

Virat Kohli and Sunil Chhetri are popular sportsmen who lead India’s cricket and football teams respectively. The two top the list of most loved sportspersons in the country. Thus it is not shocking to see that the two are good friends. The two recently went live on their respective Instagram profiles in order to chat with their fans. Their live session also created a lot of buzz and excitement among their fans. Well, the live session attracted Bollywood actors Ranveer Singh and Anushka Sharma who also shared their views about the skippers' stories. Ranveer Singh clearly takes away the limelight because of his fan moment. He literally could not stop himself from spamming their Instagram live with some of his extremely hilarious comments. Read more to know what exactly did Ranveer Singh do on Virat Kohli and Sunil Chhetri’s Instagram.

The two sportsmen were talking about their past experiences and how they had to use public transport. Chhetri on his part said that he used to get away without paying for the bus ticket. He said that he would do the same until one day he got caught and the fine for being caught was increased drastically. To which, Ranveer Singh replies, "Captain kare savari Bina ticket”. Along with this, Ranveer also commented on another topic Virat and Sunir were talking about. 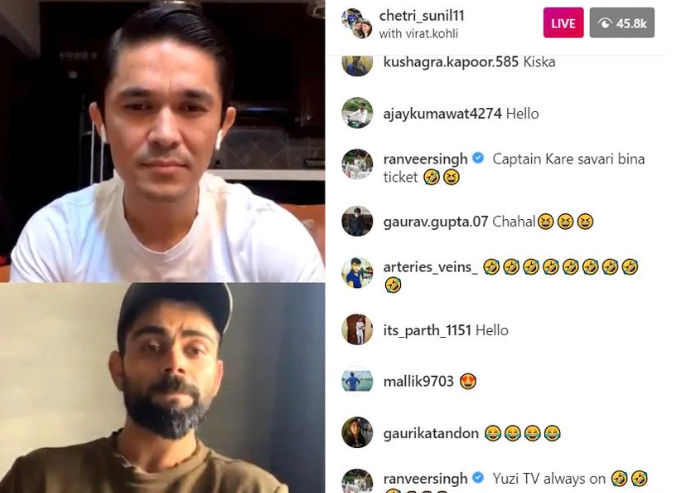 As the conversation kept progressing, Kohli and Chhetri started discussing anecdotes and past experiences. They spoke about how they would have to be resourceful in their early days just to complete the easiest tasks like retrieving the ball from the gutter or setting up a court to play badminton. Seeing this, Ranveer Singh shared another hilarious comment on their Instagram live. He wrote, “Cheeku Jugaadu number one!" which refers to Virat Kohli’s pet name, Cheeku. This has surely shown the fans Ranveer Singh’s superfan moment for two of the most renowned sportsmen of India. 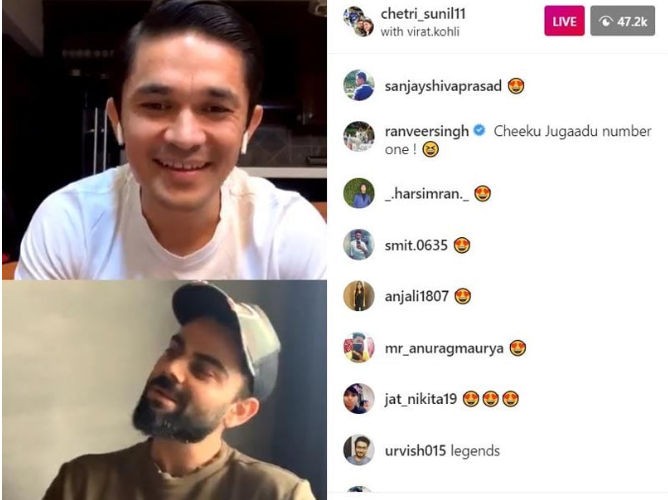 On the professional end,  Ranveer Singh is currently prepping up for his upcoming film, '83. The film, '83 will revolve around the life of the famous Indian cricketer, Kapil Dev. The film stars popular faces of the industry including, Deepika Padukone, Hardy, Sandhu, Tahir Bhasin and Jiiva. '83 is being directed by Kabir Khan and is being produced by Deepika Padukone, Kabir Khan, Sajid Nadiadwala and Vishnuvardhan Induri under their respective production companies. Ranveer had also shared some pictures of Ammy getting trained for his character in the film. One of the posters includes the Punjabi star, Ammy Virk who is going to be playing the role of  Balwinder Singh Sandhu who was given the tag, ‘swingin sardarji’.

PEOPLE HAVE PLEDGED SO FAR
LATEST NEWS
View all
5 hours ago
Arshad Warsi joins Sonam Wangchuk's initiative, says, 'going to stop everything Chinese'
1 hour ago
A little girl asks Sonu Sood, 'Papa is asking, will you send Mumma to Nani house?'
5 hours ago
'Because I'm just a human who's allowed to...': Zaira Wasim returns to Twitter, Instagram
4 hours ago
From a salute to Sonu to 'Boycott China'; Here's Entertainment news recap of the day
3 hours ago
Kareena Kapoor gives major BFF goals in this throwback pic with Amrita Arora