Recently actor Raveena Tandon posted a video from her Holi party where she received backlash from her fans as she played Holi with her pet. Read on.

Yesterday, many celebrities rang in the festival of Holi and were seen having a blast. The actors later shared pictures from their Holi bash and regardless to say, fans were completely loving the pictures. Recently, actor Raveena Tandon posted a video from her Holi party where she received backlash from her fans.

Raveena Tandon recently took to Instagram to share a video from her Holi party. In the video, the actor is seen grooving to a song along with her dog. Raveena seems to be having a fun time with her puppy as they were filled with colours all over them. But seems like this act of Raveena Tandon didn’t go well with fans.

Many fans criticised Raveena Tandon for playing Holi with her dog. Fans went on to comment on Raveena's post. One of the comments read: “Don’t put colour on dogs. It is allergic,” while the other one wrote, “Dogs are allergic to Holi colours”. Check out a few comments from fans who were upset with Raveena Tandon for playing Holi with her pet and also check out the video here. 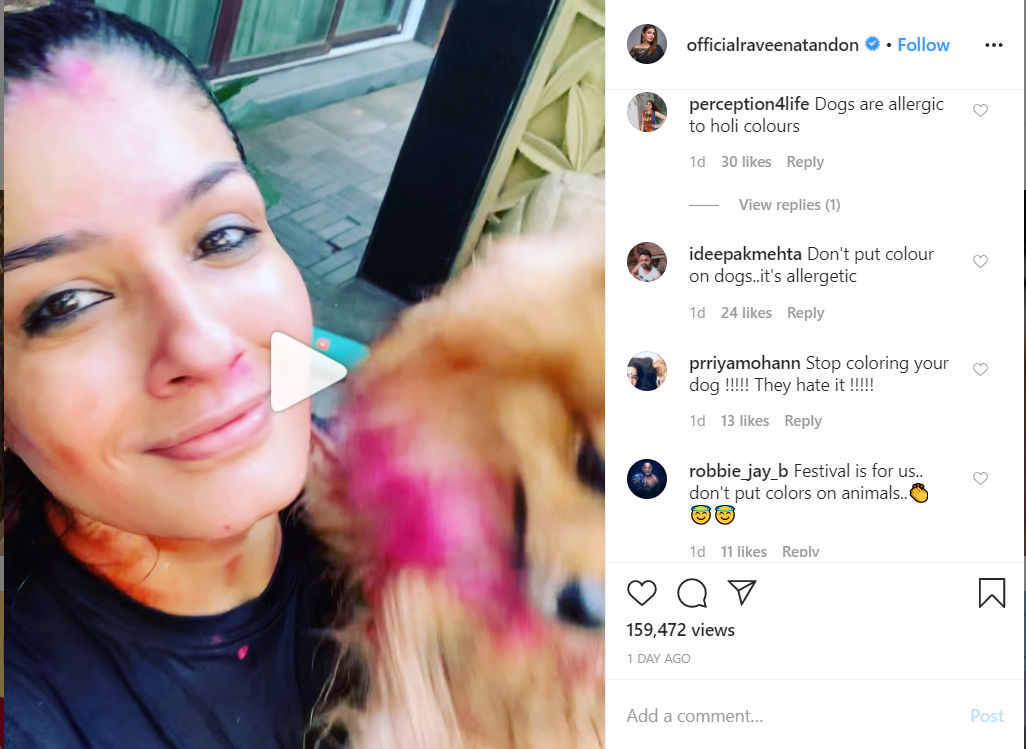 Raveena Tandon will soon be seen in Prashanth Neel’s next K.G.F: Chapter 2. The film also stars Sanjay Dutt and Srinidhi Shetty in pivotal roles. The film is said to be a second sequel which will be a continuation of the place. Fans are already excited for the film as is said to be releasing in April 2020. It was reported that the film is currently in the filming stage and will soon begin its post-production plans.

Also read | Raveena Tandon Did THIS When Passengers On Flight Were Annoyed Over Missing Pilot; Watch

Apart from that, Raveena Tandon will also be seen in Alert 24x7 alongside Anupam Kher, Sanjay Dutt, Kabir Bedi and Saurabh Shukla in pivotal roles. The film is directed is by Soujan Josseph and written by Dilip Shukla. The film is based on an action thriller comedy.

PEOPLE HAVE PLEDGED SO FAR
Aishwarya Rai Bachchan & other Bollywood divas who stunned in their wedding looks
Nora Fatehi does not shy away from posting memes on herself on her social media
Milind Soman's wife Ankita exercises with his mother, calls her an 'inspiration'; watch
With over 100 serials under her belt; here's a look at Ekta Kapoor's staggering Net Worth
'Iqbal' to 'Mary Kom', inspirational Bollywood movies to watch during quarantine
DO NOT MISS
SEX WORKERS SEEK GOVT'S AID
SURPRISE FOR 2-YR-OLD
NY GETS 1,100 VENTILATORS WITH HELP FROM CHINA, OREGON
MEA SLAMS IMRAN KHAN'S J&K COMMENTS
B-TOWN PRAISES PM'S '9 MINS' APPEAL
CM YOGI ON LIFTING OF LOCKDOWN