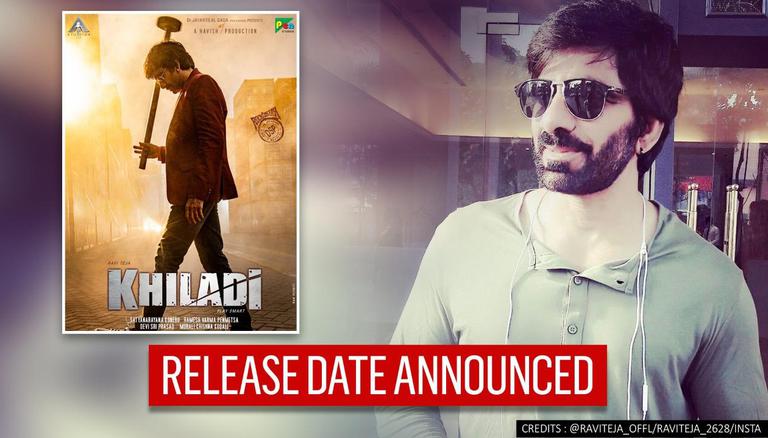 Telegu actor Ravi Teja who is receiving love and appreciation for his latest release Krack announced the release date of his forthcoming film Khiladi. Ravi shared an intriguing poster from the film and revealed that the film is slated to hit the screens on May 28. In the poster, the actor can be seen donning black formal attire while posing with a gun.

He wrote, “Let’s play from 28th May in cinemas.” The film directed by Ramesh Varma will feature Ravi in dual roles. The film is produced by Satyanarayana Koneru. A couple of days back on his 53rd birthday, Ravi Teja shared the first glimpse of his upcoming film on Twitter and penned a message for his fans in response to all the love that was showered by his fans on the special day.

Read: Ravi Teja's 'Krack' Emerges Superhit At The Box Office, Know How Much It Earned This Week

The Khiladi first look doesn't seem to have disappointed the fans, who are excited about the film. The film also stars Dimple Hayathi, Keshav Deepak, and Meenakshi Chaudhary and is directed by Ramesh Verma. The first look shows actor Ravi Teja walking through a cloud of smoke and towards three cars which he looks like he is about to destroy with some kind of giant hammer. Although this does not give much insight into the movie, it does tell fans that Teja's character is going to be different from the kind of roles he has done in the past.

Meanwhile, according to Eenadu, Ravi Teja's recent action-drama Krack (2021), was released on January 9 to critical and commercial success. It marked a major professional comeback for the actor, who had been on a career sabbatical prior to that film. With Khiladi, Ravi Teja hopes to break back into the mainstream Telugu cinema and cement his role as the "Telugu action hero".Before Krack, Ravi Teja was also last seen in the science fiction movie Disco Raja, which was released on January 24, 2020. The film became a critical and commercial failure, prompting Ravi Teja to halt experimenting with roles in the future, with plans for a sequel also being cancelled. Some of his hits include Bengal Tiger, Neninthe, and many more.

WE RECOMMEND
Ravi Teja reveals he is "wishing to work again" with Gopichand; know details
'Khadgam' movie cast: Srikanth, Ravi Teja and other actors part of the Telugu drama
Ravi Teja's 'Krack' emerges superhit at the box office, know how much it earned this week
Ravi Teja shares the first look of his highly anticipated 'Khiladi'; fans praise the actor
Post the success of 'Krack', Ravi Teja to release 'Khiladi' first look on January 26