The demise of veteran actor Rishi Kapoor was a great blow to the entertainment industry. The entire Bollywood fraternity was left in great shock and grief.

The demise of veteran actor Rishi Kapoor was a great blow to the entertainment industry. The entire Bollywood fraternity was left in great shock and grief. The senior star who was cremated in the presence of his near and dear ones, could not meet his daughter Riddhima Kapoor Sahni during his last few hours. A week after Rishi Kapoor's death, Riddhima has been sharing sweet memories in the form of throwback photos on social media.

Earlier Riddhima who is lamenting over the loss of her father, shared two endearing throwback pictures on her Instagram story. One of the pictures seems to be from the time when Aishwarya Rai Bachchan, Abhishek Bachchan and their daughter Aaradhya had visited Rishi Kapoor and Neetu Kapoor in New York with Ranbir and Alia during the treatment days. In the adorable picture, the late actor sitting in the center can be seen having a great time with his family and friends. In the other picture, the doting daughter can be seen posing with her late father and mother Neetu. Riddhima captioned both the pictures with heart emoticons and remembered her late father with fond memories. 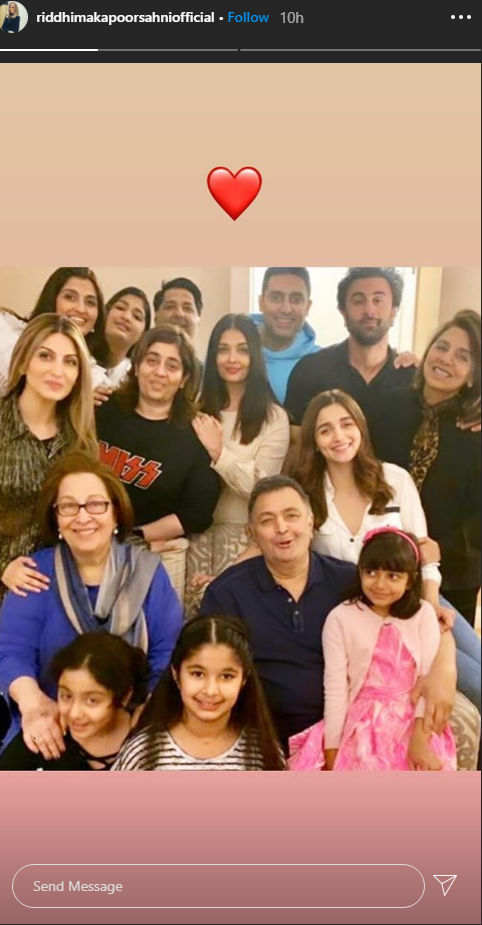 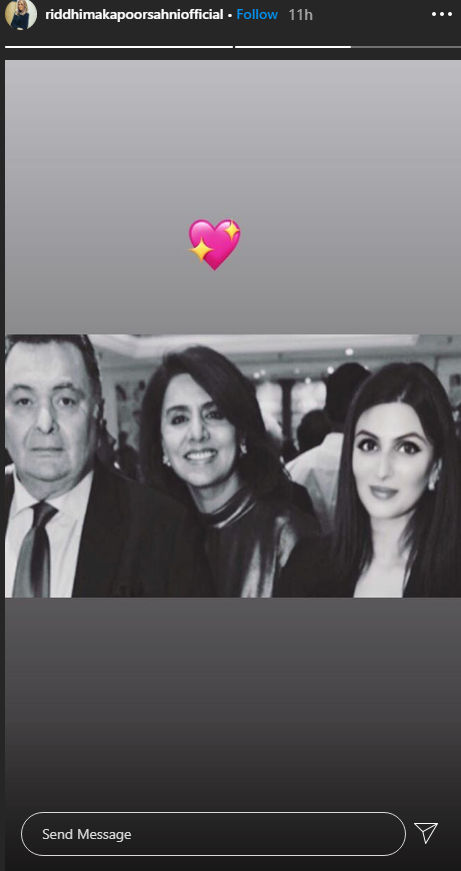 Rishi Kapoor passed away on April 30, after fighting a long battle with cancer. The actor was admitted to HN Reliance Foundation Hospital in Mumbai after he complained of breathing problems. Riddhima who stuck in Delhi was unable to attend her father's funeral. She had arrived in Mumbai after the cremation via road as flights weren’t operational due to the virus lockdown.

An official statement released regarding Rishi Kapoor's passing read, "Our dear Rishi Kapoor passed away peacefully at 8:45 AM IST in hospital today after a two-year battle with leukemia. The doctors and medical staff at the hospital said he kept them entertained to the last. He remained jovial and determined to live to the fullest right through two years of treatment across two continents. Family, friends, food, and films remained his focus and everyone who met him during this time was amazed at how he did not let his illness get the better of him. He was grateful for the love of his fans that poured in from the world over. In his passing, they would all understand that he would like to be remembered with a smile and not with tears. In this hour of personal loss, we also recognize the world is going through a very difficult and troubled time. There are numerous restrictions around movement and gathering in public. We would like to request all his fans and well-wishers and friends of the family to please respect the laws that are in force. He would not have it any other way."

Read: Rishi Kapoor Wanted Ranbir Kapoor To Marry This Person And It's Not Alia Bhatt

PEOPLE HAVE PLEDGED SO FAR
LATEST NEWS
View all
1 hour ago
Pooja hegde fumes at instagram hackers: 'hope you haven't given out personal information'
1 hour ago
Amitabh bachchan shares throwback picture from 'kabhi kabhie' & 'gulabo sitabo' sets
1 hour ago
Hema malini tweets clarification after backlash over atta and bread maker ad
1 hour ago
Bhumi-konkana's 'dolly kitty aur woh chamakte sitare' to release on ott?
1 hour ago
Alaya f loves to pose on beautiful streets and her instagram is a proof of it