Ever since veteran actor Rishi Kapoor passed away on April 30, her daughter Riddhima Kapoor has been sharing old and throwback family pictures on social media.

Ever since the veteran actor Rishi Kapoor passed away on April 30, her daughter Riddhima Kapoor Sahni has been sharing old and throwback pictures of the late father with the entire family. From sharing some of the rare unseen childhood pictures with her father and brother Ranbir to revisiting their family holidays, Riddhima has been treating fans with some amazing memories. Recently, the doting daughter shared a selfie on social media of her mother Neetu and daughter Samara.

Riddhima took to her Instagram story and shared a selfie in which her daughter Samara and mother Neetu can be seen posing while flaunting their beautiful smiles. Apart from this, Riddhima also shared an adorable snap with her sister-in-law Natasha Nanda. In the snap, the two can be seen striking a pose that seems to be from a party. 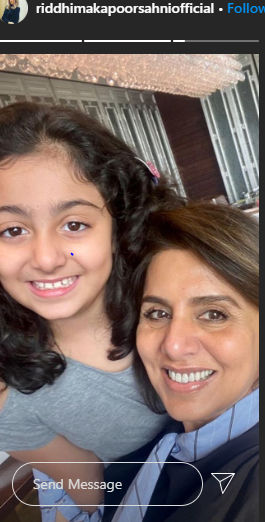 This is not the first time that Riddhima has shared a throwback memory with her fans. Sometime back, Riddhima took a stroll down the memory lane and shared a few rare unseen family pictures with Rishi, mother Neetu, and brother Ranbir Kapoor from her childhood on social media. One of them is a family picture of them during a function. In the adorable snap, a young Ranbir is seen sitting on Rishi’s lap, Riddhima is seen sitting between Rishi and Neetu while innocently posing for the camera. Neetu has her hand under Riddhima’s chin.

Another is a candid black and white picture of them at another function. A young Riddhima is seen seated between Rishi and Neetu on a chair. Ranbir is missing from the photo. In the third cute monochrome snap, a distracted but delighted Riddhima is seen looking away from the camera as father Rishi Kapoor holds her close. In the black and white pictures, Riddhima Kapoor resembles a lot like her daughter Samara Sahni.

PEOPLE HAVE PLEDGED SO FAR
LATEST NEWS
View all
46 mins ago
Sonu sood thanks ajay devgn for his encouraging words, vir das controversy resolved & more
2 hours ago
Shekhar kapur claims he watched 'mr india' for the first time in 34 years, shares insight
4 hours ago
Sonu sood thanks ajay devgn for words of encouragement, says they 'give more power'
1 hour ago
Vicky kaushal stuns in sunkissed selfie, reminisces shooting where he acknowledged sunsets
2 hours ago
Shraddha kapoor takes her dog shyloh out for a walk, calls him 'chotu maharaj'