Salman Khan shares details about Lara Dutta's 'Hundred' while he makes a Partner reference. Have a look at the post with all the details related to the series.

Salman Khan recently shared the poster of Lara Dutta’s upcoming Hotstar special series, Hundred. Fans cannot help but get nostalgic as Salman Khan mentions the film Partner in the caption for the post. The poster features Lara Dutta in the shoes of a police officer.

Lara Dutta is all set to make a comeback through her upcoming web series, Hundred. One of the many people to show their support towards the actor and her series has been Bollywood superstar Salman Khan. He shared the official poster of the upcoming Hotstar series where Lara Dutta and Rinku Rajguru can be seen posing in a cool way.

In the caption for the post, Salman Khan has mentioned that Hundred stars his favourite heroine from the film Partner. He has informed his followers that she is doing a show and he wants them to go and watch it. The Race 3 actor has also mentioned the tagline of the film which says “Do Khiladi Problem Bhaari”.

Fans can be seen expressing their delight as Salman Khan refreshed their memories of the much-loved comedy-drama Partner. Lara Dutta also decided to comment on the post expressing her affection for her "partner". Have a look at the post and the trailer of the series here. 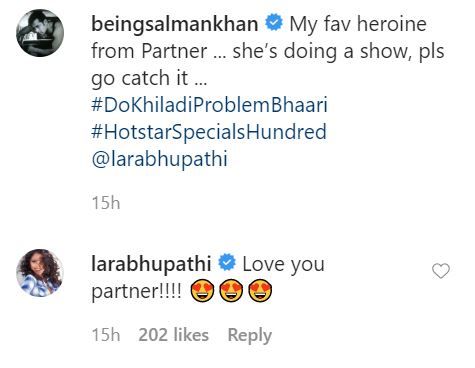 Read After Salman Khan, Katrina Kaif Comes Out In Support Of Daily Wage Earners Of Maharashtra

Hundred is an upcoming action-drama series which will release on DisneyPlus Hotstar VIP. The plot of this series revolves around the life of a woman who gets to know that she has an incurable tumour which only gives her a hundred days to live. She gets along with a lady cop who helps her do everything she wants in the last few days of her life. The series is created by RAT films and also stars actors like Karan Wahi amongst others. Have a look at the Hundred trailer from Lara Dutta’s Instagram here.

Read How Salman Khan Has Set Trends Throughout His Career: From Turquoise Bracelet To Tank Tops