Sara Ali Khan Reveals That She Misses Being A Working Woman In Her Recent Post; See Here

Sara Ali Khan took to her Instagram account to share a photo collage about how she missed being a working woman. Check out the pic below.

Due to the Coronavirus lockdown, the shooting and the release of several films have been delayed. Bollywood actors are also staying home and are practising social distancing to prevent the spread of Coronavirus. The Love Aaj Kal actor Sara Ali Khan is staying at home with her mother Amrita Singh and her brother Ibrahim Ali Khan. The actor is spending time with her family during the time of crisis.

But on the other hand, the one thing that Sara Ali Khan is missing the most during this lockdown is working and shooting for films. Reportedly, she was shooting for the film Atrangi Re but returned to Mumbai when the lockdown was announced.

On May 6, Sara Ali Khan took to her Instagram account to share a collage of the pictures from the films that she has worked on in her career. Sharing those pictures, the actor was even remembering her days on the sets of these films. In each of the picture from the collage, Sara Ali Khan is holding the clapboard of all the films that she has worked for.

Looking at these pictures, the actor in the caption remembered the shooting days and also expressed that she missed being a working woman. 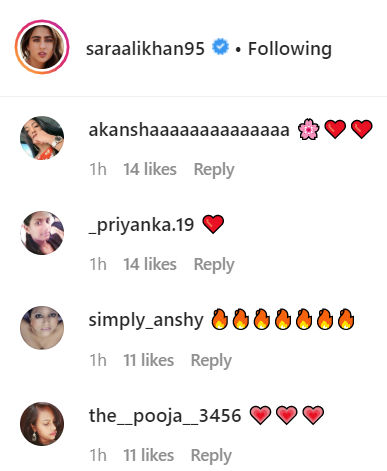 Up next, Sara Ali Khan was gearing up for her film Coolie No.1. The comedy film features Varun Dhawan alongside Sara Ali Khan. The film was scheduled to hit the screens on May 1 but got postponed due to COVID-19 pandemic.