Satya Paul's death has shocked the fashion world. Several Bollywood celebrities took to their social media to mourn the loss of the actor. Read to know more.

Legendary fashion designer Satya Paul who is popularly known for revolutionising sarees breathed his last January 6, 2021, in Coimbatore, Tamil Nadu. He was 79-years old. As soon as the news of his demise broke out, several Bollywood celebrities are mourning his loss. From Kangana Ranaut to MAsaba Gupta, all have taken to their social media to express grief for the loss of the designer Satya Paul.

Kangana Ranaut took to Twitter to express grief. She retweeted the news of Satya Paul's death and wrote, 'Om Shanti'. Director Madhur Bhandarkar also took to Twitter to laud Satya Paul's contribution on the field of fashion. Lakshmi Manchu wrote that he was her favourite designer. She also added that Paul filled her life with colours and fabrics.

Sad to hear demise of most influenced Fashion Designer @satyapaul sir.
His immense contribution in the fashion industry will be always remembered, My
heartfelt condolences to @puneetnanda and the family. #OmShanti ðŸ™

Oh nooooo! He was one of my favourite saree designers. So fun and yet effortless. RIP #SatyaPaul Ji. You filled our lives with your fabrics Colors and design. https://t.co/e0MZQ4vCio

Masaba Gupta took to her Instagram stories to appreciate his brand as well. She worked for the late designer's brand as a creative head from 2012 to 2014. She wrote that young fashion designers should take inspiration from him. She also went on to say that people can take inspiration from Chanel but they should know what happened on their soil first. 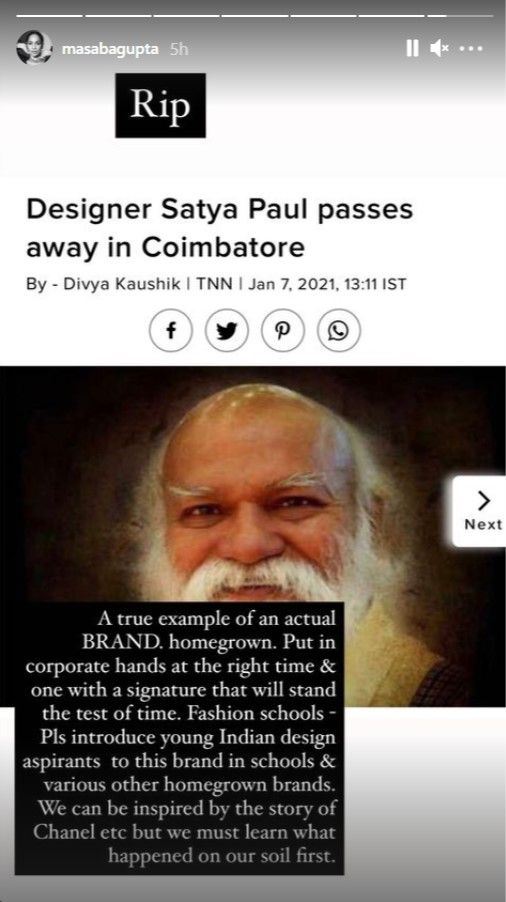 Chef Kunal Kapoor also wrote on Twitter that it is an end of an era now that Satya Paul passed away. Isha Yoga Centre's founder Sadhguru also expressed his condolences. He wrote that Satya Paul is an example of what it means to live with immeasurable passion. He further wrote that it was a privilege to have him among them.

#SatyaPaul, a shining example of what it means to live with immeasurable passion and unrelenting involvement. The distinct vision you brought to the Indian #fashion industry is a beautiful tribute to this. A privilege to have had you amongst us. Condolences & Blessings. -Sg pic.twitter.com/DNMZ0DXvOf

Satya Paul's son Puneet Nanda took to Facebook to announce the news of his father's demise. In the post, he wrote that Satya Paul had a stroke on December 2 and was recovering in the hospital. He took the permission from the doctors to take him back to Sadhguru's Isha Yoga Centre. Further, he mentioned that he started enjoying Yoga and started living at the Isha Yoga Centre since 2015.