Shahid Kapoor recently revealed his feelings and thoughts on Dhoom star, Hrithik Roshan through his Instagram. Read more to know what Shahid Kapoor has to say.

Shahid Kapoor is one of the actors who recently took to his Instagram to start a Q & A session to interact with his fans. In the Q&A session, a fan asked Shahid about his thought on Hrithik Roshan. Read more to know what was Shahid Kapoor’s answer to his question. 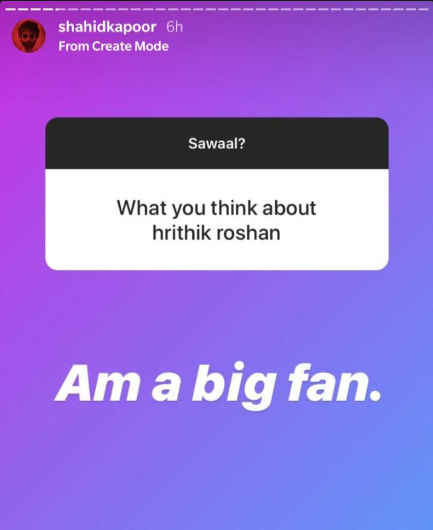 Shahid Kapoor managed to successfully have a Q&A that revealed his views about the Dhoom star. Shahid Kapoor responded by saying that he is a “huge fan” of the star. He has also revealed in his recent interviews that he also admires the way Hrithik Roshan dances. This might be a common point between the two stars as Shahid and Hrithik both are considered as Bollywood’s top dancers.

Also Read | Shahid Kapoor Hosts A Q&A With Fans, Reveals He Wants To Do More Films Like 'Kabir Singh'

On the professional front, Shahid Kapoor was spotted in the city of Chandigarh as a number of his fans shared several BTS scenes from the sets of his upcoming film Jersey. A video on the internet shows Shahid Kapoor riding a Royal Enfield along with a child actor.

The star has already been comfortable with the cruiser bike as he was riding the same bike in his last blockbuster Kabir Singh. Shahid Kapoor’s Jersey is about a boy who wants the jersey of the Indian Cricket Team as his birthday gift.

The film is directed by Gowtam Tinnanuri and will star  Mrunal Thakur of Super 30 in a prominent role. Currently, all the shoots have been called off due to the Coronavirus quarantine measures.

Also Read | Fan Asks Shahid Kapoor If He Is Bored Of 'quarantine'; Actor Has The Best Response