Shahid Kapoor shared one of his throwback pictures, flaunting his chiselled physique, and fans cannot stop themselves from going gaga over his rough look.

Shahid Kapoor, who is currently all busy spending quality time with his family amid the Coronavirus lockdown, also keeps sharing pictures of his indoor updates on social media. However, on Tuesday night, Shahid Kapoor took a stroll down the memory lane and shared one of his throwback pictures, flaunting his chiselled physique and rough look. Read on.

On Sunday, May 12, Shahid Kapoor took to his Instagram and shared a major throwback photo of himself, showing off his ripped physique. In the picture, the Kabir Singh actor can be seen posing shirtless in front of the mirror. By the looks of his makeover, hairstyle, moustache and beard, it seems like the picture might have been clicked while he was shooting for Padmaavat. Also, Shahid Kapoor ditched a caption for the post.

As soon as Kapoor shared the picture, within a fraction of seconds, fans in huge numbers gushed to talk about his mesmerising physique. While many simply drooled over his charm, some dropped endearing comments on hist post. Take a look. 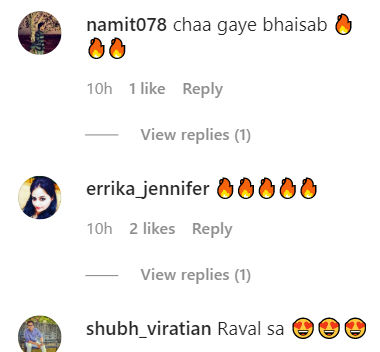 Also Read | Unseen pic of the day: Shahid Kapoor looked cute as a button in childhood and here's proof

Earlier, Shahid Kapoor shared a picture on his social media handles, wearing a helmet with a bat in his hand. Through the caption, he expressed he is missing the sets of his upcoming outing, Jersey. For the unversed, Shahid Kapoor will next appear portraying the character of a cricketer in Jersey.

He was shooting for the film in Chandigarh before the COVID-19 lockdown and was reportedly also injured once, followed by 13 stitches, while practicing for his character. And hence, after a break of a few days, he resumed shooting. However, due to the Coronavirus outbreak, he then tweeted that team Jersey is suspending the shoot.

At a time like this it is our social responsibility to do everything in our capacity to curb the spread of this virus. Team #Jersey is suspending shoot so as to enable all unit members to be with their families and in the safety of their homes. Be responsible. Stay safe.â¤ï¸ðŸ™

Meanwhile, Shahid Kapoor shared a long excerpt penned down by Pope Francis that talks about how being happy and cherishing moments in life is not a tedious task. The note by Pope Francis explains what it means to be truly happy and what a person should do in the wake of such obstacles in life. Check out the post here.

PEOPLE HAVE PLEDGED SO FAR
LATEST NEWS
View all
47 mins ago
Bhumi gives glimpse of 'pednekar ke ped' amid lockdown, shares pic of home-grown tomatoes
14 mins ago
Big stars will have to help in reducing price: director mani ratnam
1 hour ago
'ghar ki murgi...': twinkle khanna on akshay kumar forgetting to tag her in 'padman' post
48 secs ago
Twinkle khanna and akshay kumar's adorable twitter banter & other top stories of the day
2 hours ago
Amitabh bachchan played the role of a cop in these films; see list