Kartik Aaryan took to Instagram to share a picture of his portrait made by Bigg Boss 13's contestant Shehnaaz Gill in a task. Read to know more about it

This season of the reality show Bigg Boss is deemed as one of the most controversial and at the same time happening season out of all the 13 seasons. From fights to love, the contestants have their fans glued in front of the television screens to make them want to know more about everything that is happening in the house, especially about the contestants that they love and support. Recently the Pati Patni Aur Woh actor Kartik Aaryan along with his co-actor Sara Ali Khan entered the Bigg Boss 13's house to promote their upcoming film Love Aaj Kal wherein contestant Shehnaaz Gill made a portrait of Kartik Aaryan and Aaryan shared it on his Instagram too.

Kartik Aaryan shares his portrait made by Shehnaaz Gill, Gill reposts it too

Kartik and Sara attended the recent Weekend Ka Vaar episode of Bigg Boss wherein Kartik and Sara gave an interesting task to the contestants by calling them in groups of two and made them compete with each other in different rounds. In one of the tasks, Kartik asked Shehnaaz Gill and Rashami Desai to make a portrait of his in thirty seconds. However, Aaryan loved Shehnaaz's portrait to such an extent that he took it with himself and promised Salman that he will post a picture of the same on his social media handles.

The Luka Chuppi actor kept his words as he took to his Instagram story to post a picture of the portrait and captioned it writing, "What a lovely piece of art!! My portrait by @shehnaazgill. Thank you for the masterpiece." Shehnaaz too could not hold back but repost Kartik's story on her Instagram story and was all-hearts in her caption. 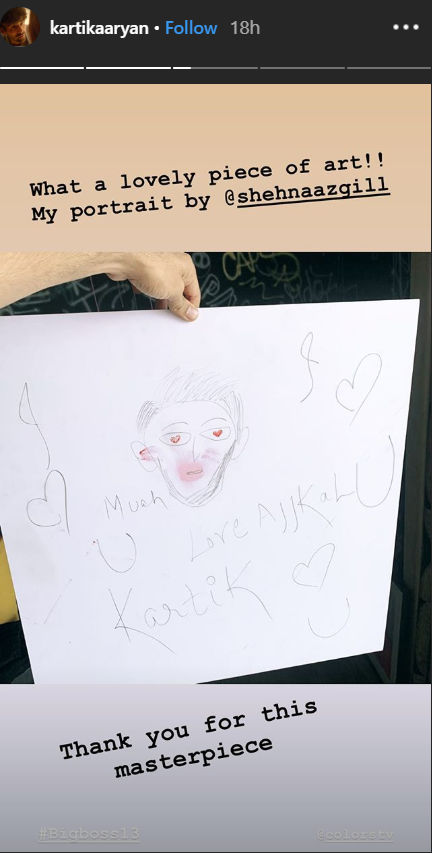 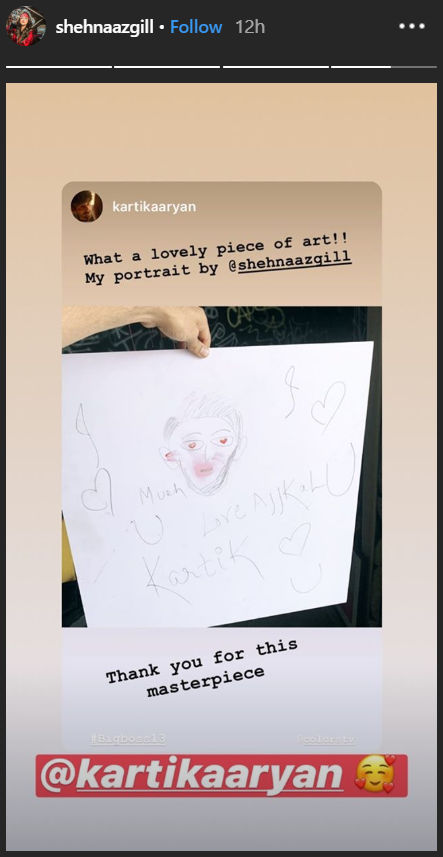