Sidharth Malhotra recently took to his twitter to refute the rumours about him being locked up in his Bandra house during the current Coronavirus lockdown.

Sidharth Malhotra is quite active on social media and often expresses his opinions on his Twitter and Instagram handles. Earlier, the Ek Villain actor was making the headlines as some media reports said that the actor is locked up in his Bandra house during the current Coronavirus lockdown. Sidharth Malhotra however, has refuted such rumours. The actor took to his Twitter to make this revelation.

Reports were doing the rounds on the internet that Sidharth Malhotra is locked up inside his Bandra house. The reports also stated that his friend, Richa Dhar is also in his house during the nation-wide lockdown. Sidharth Malhotra took to his Twitter and made it clear that these are completely false reports. 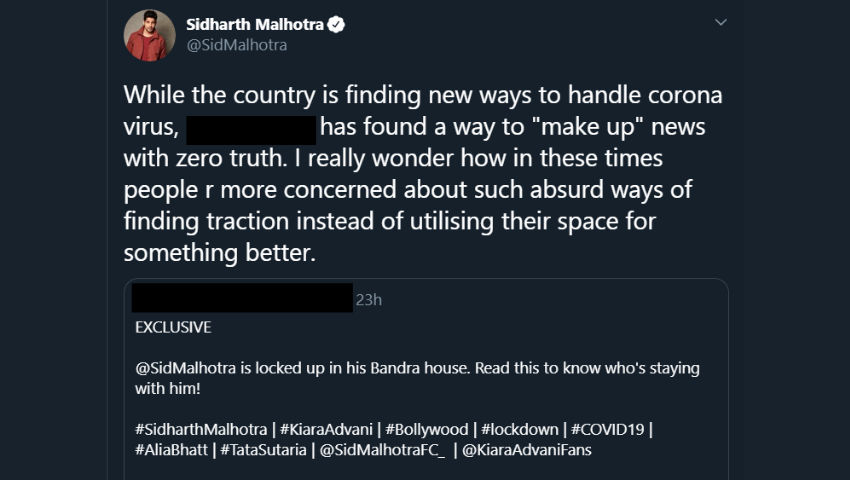 In his tweet, he said that even as the whole country is finding new ways to handle the Coronavirus pandemic, the reports have found a way to make up the news with zero truth. He said that this was false news and he wonders how in these tough times people are more concerned about such absurd ways of finding traction instead of utilising the space for something better referring to the news portal. Sidharth Malhotra's fans also supported him speaking his mind out about this. His fans criticized the website's report on Twitter, standing by the Student Of The Year actor.

PEOPLE HAVE PLEDGED SO FAR
LATEST NEWS
View all
8 hours ago
Will chris as chulbul pandey & scajo as rajjo click if 'dabangg' was remade in hollywood?
10 hours ago
Sussanne khan reflects on 9 years of charcoal, says 'single experiment can prove me wrong'
8 hours ago
Hrithik roshan shares a fan's 'lockdown transformation'; see before-after pictures
8 hours ago
Ileana d'cruz shows how she is 'avoiding people' with a stunning underwater picture
10 hours ago
Nupur sanon shares positivity amid lockdown, says 'make your heart beautiful'; see post