In the caption for her latest Instagram post, Sobhita Dhulipala hit back at her trolls with a sarcastic caption that poked fun at her past controversy

Above is Sobhita Dhulipala's latest selfie that she recently posted on social media. In the photo, Sobhita Dhulipala can be clearly seen clicking her own picture via a mirror. She is wearing her dad's old cargos from the '90s because she "loves vintage". However, what truly amused her fans was her caption for the above photograph.

In the caption for the image, Sobhita Dhulipala wittily mocked all those haters who slammed her a month ago for the fake 'self-clicked' photo. She wrote that the photo was "clicked by a neighbour". She then hilarious added that the haters will still come and say that she is lying and that she took the photo by herself. Sobhita Dhulipala's fans were impressed by her "savage" comeback to trolls and praised her for her sarcasm in the comments section of the Instagram post. 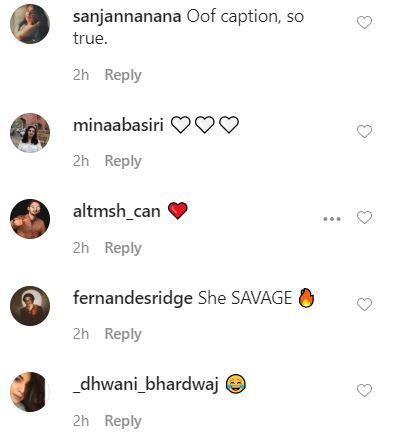 The photos that landed Sobhita Dhulipala in trouble

Above is the photo that caused the controversy. In the caption for the photos, Sobhita Dhulipala claimed that she managed to click the photos by herself with the help of a timed camera. However, fans accused her of lying about the 'self-clicked' photos. Moreover, a BTS image revealed that another man helped Sobhita Dhulipala take the photo.

The celebrity then responded to the hate comments and stated that only one of the pictures was clicked by herself. She added that the second photo was taken by a "kind gentleman" who helped her take the picture. She even posted a long response on her social media page.

Sobhita Dhulipala is known for featuring in popular Amazon Prime Original and Netflix shows like Made In Heaven, Bard Of Blood and Ghost Stories. She has also played prominent roles in Bollywood films including The Body and Raman Raghav. On the work front, she is all set to feature in the Malayalam film Kurup. However, filming has been stalled due to the pandemic.