Sonakshi Sinha indulged in a prank with Varun Sharma recently. She has said that she cannot wait to scare him again. Read to know more details.

Sonakshi Sinha, like other Bollywood celebs, has been quarantining in her house during the coronavirus lockdown. Recently, fans saw her and actor Varun Sharma in a video. Sinha, on her Instagram handle, shared the video and gave it a hilarious caption. Read on to know more details about this funny video:

Taking to his official social media handle, Varun Sharma posted a video, where fans can see that he is coming out of a lift and on the other end, Sonakshi Sinha is waiting for him. As soon as the door opens, she scares him, and fans felt that the expression on his face is priceless. Sharma captioned the video saying, “Thappad se darr nahi lagta @aslisona Dhappa se lagta hai!!ðŸ˜‚ðŸ˜‚ #throwback #goodolddays.” Here is the video:

Now, Sonakshi Sinha, who played this prank, took to her official Instagram handle and shared this video in her story section. In the caption, she stated that she can hardly wait to pull this prank again. It is captioned as “Can’t wait to do this againnn.” Fans are loving this video and it has crossed over a lakh likes in a day's span. 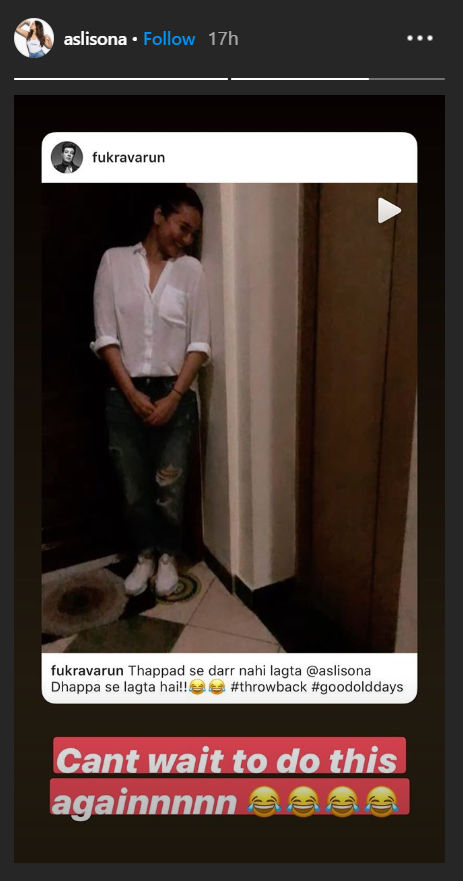 On the work front, Varun Sharma will be next seen in the horror-comedy flick, Roohi Afzana. It will feature Rajkummar Rao, Janhvi Kapoor, and Varun Sharma in the lead role. Kapoor is set to play her first dual role in this film. It will be the second horror-comedy film by Rao, first being Stree. Fans are highly anticipating the release of this film.