Actor Sonam Kapoor Ahuja recently took to her Instagram handle and shared a vibrant picture of herself wearing a stunning gold designer dress.

Sonam Kapoor Ahuja is creating a buzz on the internet with her latest golden avatar. Fans could see her dressed beautifully in a golden dress from the clothing collection of Arpita Mehta. As she looked absolutely stunning in her pictures, all her fans couldn’t keep calm and drop in numerous fire and heart symbols.

Sonam Kapoor Ahuja recently took to her Instagram handle and posted some of her mesmerizing photos in which she can be seen wearing a three-piece golden outfit having a classy plunging neckline. The dress consisted of elegant mirror work with little shells hanging all over her attire. As the plunging top and its coat can be seen all filled with intricate mirror work, her look also consisted of a multi-coloured striped skirt. In the next few Sonam Kapoor Ahuja’s photos, she can be seen posing while sitting in the sand with her hair elegantly moving with the wind.

In the caption, she stated that with a body of work that borrows from the sartorial legacy of the country, Arpita Mehta’s collection has always celebrated the modern Indian women. She then added how she cannot wait to have the very essence of this creative genius encapsulated in this exquisite coffee table book.

Many of the fans took to Sonam Kapoor Ahuja’s Instagram and commented on how her latest pictures were breathtaking. Some of the fans even stated as to how they thought that she was the prettiest girl in the world while others praised her for being so pretty.

Many of her celebrity friends and family also took to her Instagram and dropped in adorable compliments for her. Check out some of the fans’ reactions to Sonam Kapoor Ahuja’s photos on Instagram. 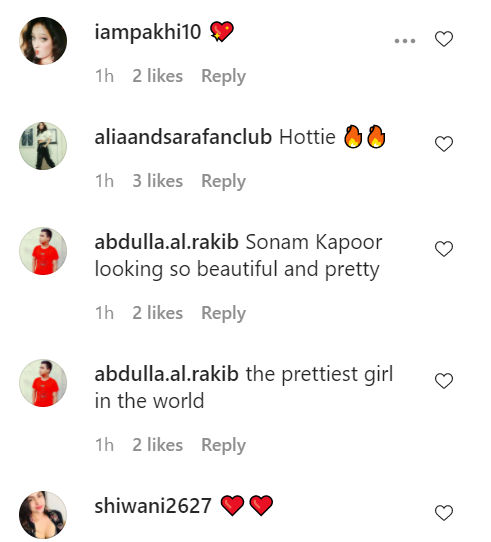 As Sonam Kapoor Ahuja stunned her fans in her golden dress, she also posted another vibrant picture of herself that made her fans drool on her sizzling beauty. In the photos, she can be seen wearing a mustard coloured attire having a golden glittery look. She can also be seen slaying her entire look with her bold makeup. In the caption, she gave credits to her hair and makeup stylists along with the photographers, dress and jewellery designers, etc. Her entire comment section was flooded with hearts and heart-eyed emojis to illustrate how pretty she looked in her photos.