Recently, Sonam Kapoor took to social media to share a picture that had a list of fake lockdown news going viral on the internet. Take a look at it.

During the ongoing coronavirus outbreak, several social media platforms have become a source of information for the citizens who are containing themselves inside their houses. Amid this, there are several cases of fake news being circulated causing havoc amongst people. Bollywood actor Sonam Kapoor recently debunked one such fake news that had gone viral on social media. Read on:

Sonam Kapoor recently shared a post that was going viral on social media. The post had a list of rules and regulations that were said to be issued by the government. Sonam Kapoor reshared the post of Mumbai Police who even put a fake stamp on it. 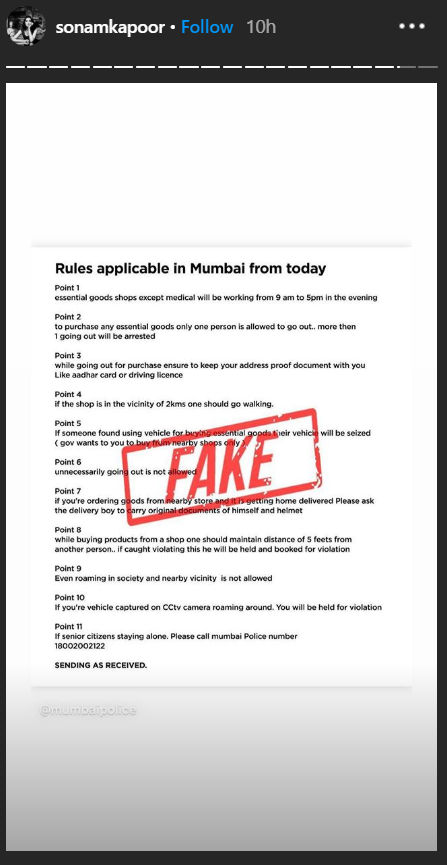 According to the post that went viral on social media, it explained a set of 11 new rules that had been applicable in Mumbai. This came after the Maharashtra government declared a lockdown in the state due to the increasing cases of coronavirus. According to the fake news, it was mentioned that only essential shops except medical stores will be working.

The image also listed rules like one should keep address proof handy while stepping out to purchase goods, one should not use vehicles for travelling within the distance of 2kms, etc. The Mumbai Police shared the same image on their social media and further wrote, “We would like to inform Mumbaikars that the attached guidelines have not been issued by Mumbai Police. We request citizens to neither believe nor forward this message to any of their friends or family members. Please rely only on official sources for any information. #dial100”.

The Union Home Ministry announced several guidelines for Unlock 2.0 last night. The latest guidelines will come into effect from July 1, 2020, in the next phase of lockdown. The government also mentioned that the newer guidelines are based on the feedback received from states and union territories.

According to the new guidelines issued for Unlock 2.0, educational institutions will remain closed. Further large gatherings will be prohibited. However, the night curfew has been extended from 10 pm-5 am. The Prime Minister of India, Narendra Modi will also be addressing the nation today at 4 pm.

LATEST NEWS
View all
5 mins ago
Remo D'Souza on Saroj Khan's biopic: 'It's too early, however, it's my dream project'
1 hour ago
Annu Kapoor opens up on favouritism & hypocrisy in Bollywood, says 'people are diabolic'
31 mins ago
MS Dhoni fans share a video to pay tribute to late actor Sushant Singh Rajput
2 hours ago
Sanjay Mishra starrer 'Bahut Hua Samman' to soon get a release on OTT platform
12 mins ago
Sidharth Malhotra pays homage to Kargil hero Captain Vikram Batra on his death anniversary