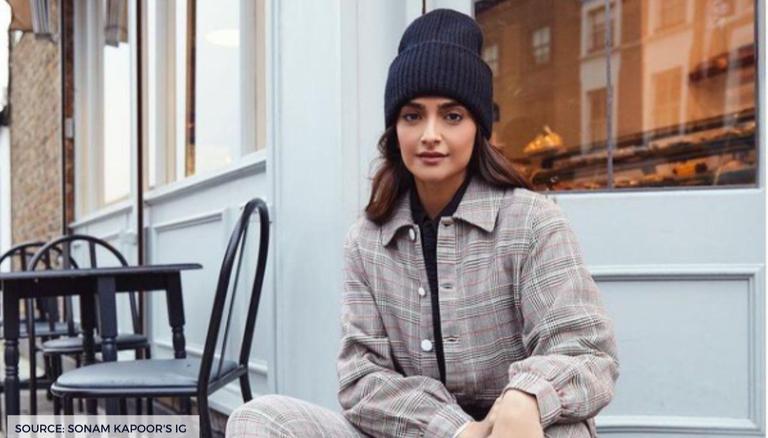 Bollywood actor Sonam Kapoor is often seen sharing BTS videos and pictures from her movie shoots. She is currently shooting for Sujoy Ghosh's new movie Blind. The actor shared a video with Sujoy as they were on the set of the film. Sujoy was seen reciting lines from the film which seemed hilarious. Take a look at Sonam Kapoor's Instagram story featuring Sujoy Ghosh.

Sonam Kapoor is currently occupied shooting her upcoming film Blind. Apart from sharing the BTS pictures of the film, the actor also shared a video where she is having a conversation with Sujoy Ghosh while they were on the set. Sujoy is seen wearing an olive green jacket and face mask for safety. Sonam asks him if he will be playing any role in the film. Sujoy says he is doing a small role in the film and his dialogue is very small. He recites his dialogue saying, "What is that bus stand doing there?". Sonam laughs and says that this is the entertainment on their set. She adds that Sujoy is not taking his job seriously at all. Take a look at the hilarious video here:

Also read | Sonam Kapoor Goes On A Date With Herself, Calls It 'self-care At Its Finest'

Sonam Kapoor's new movie Blind is a crime thriller film bankrolled by Sujoy Ghosh, Avishek Ghosh, Manisha W, Pinkesh Nahar, Sachin Nahar and Hyunwoo Thomas Kim. The Blind cast features Sonam in the lead role along with Purab Kohli, Vinay Pathak and Lillete Dubey in supporting roles. The plot of the film revolves around a blind police officer who is in search of a serial killer. It is an official Hindi remake of the 2011 South Korean film of the same name.

She shared a BTS picture on her Instagram as she posed with the director Shome Makhija and the DOP of the film Gairik Sarkar. They have been shooting in Glasgow, United Kingdom. Sonam wrote, "We are making a thriller and are very serious about our jobs. The cold is making us behave this way. Flanked by The DOP and The Director". Take a look at the picture on Sonam Kapoor's Instagram account.

WE RECOMMEND
Sonam Kapoor Ahuja shares fun BTS pic with director Shome; quips 'We're serious about job'
Sonam Kapoor goes on a date with herself, calls it 'self-care at its finest'
Sonam Kapoor spends time with husband Anand in Glasgow, shares picture of board game
Sonam Kapoor's series of unseen childhood photos are just too adorable to miss
Sonam Kapoor ready to take on 2021 with 'love of her life' Anand Ahuja, reveals plans