Bollywood actor Sonam Kapoor, who is currently under self-isolation in New Delhi, shared a hilarious yet relatable meme about getting ready amid lockdown.

Sonam Kapoor shared a hilarious meme earlier on Friday, April 17 that features her all dressed up to go nowhere. The Aisha actor updated her Instagram story with this funny yet relatable meme as there are no events to get ready for during this lockdown period. Sonam captioned the meme saying "just dressing to impress the different rooms in my house". 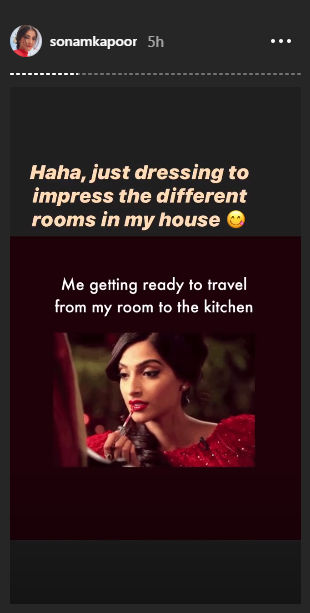 Sonam Kapoor returned to her in-laws' house in New Delhi from her home in London earlier last month to self-quarantine along with her husband Anand Ahuja.

The actor has been updating her social media account frequently since the country went into lockdown and been sharing her daily activities with her fans and followers. Sonam has shared plenty of throwback pictures with her family in Mumbai as she has repeatedly claimed that she misses being with them amid the lockdown.

Read | Sonam Kapoor shares an unmissable pic with cousins as she misses her childhood; See here

Earlier on Thursday, Sonam had also shared a throwback picture from her childhood album featuring her along with her cousins Arjun Kapoor, Akshay Marwah and Mohit Marwah. Her fans and followers showered the post with their likes and comments about how 'cute' and 'adorable' they looked as children.

Sonam wrote in the caption, "I miss you all", to which her cousin and Bollywood actor Arjun Kapoor replied saying, "Miss you too Sonam. Sonam and her 3 musketeers.".

The actor has reportedly taken up a project which is a remake of the Korean film Blind, originally directed by Ahn Sang-hoon. The crime thriller that revolves around a missing person's case is already been remade by Tollywood with actor Nayanthara as the lead.

As of now, no official announcements have been made but there is a buzz going around that Shome Makhija will direct the Hindi remake of the film and Sujoy Ghosh will be taking up the role of the creative director.

PEOPLE HAVE PLEDGED SO FAR
LATEST NEWS
View all
6 hours ago
Raveena Tandon wishes her parents on 54th wedding anniversary, shares throwback pics
5 hours ago
Anupam Kher to launch autobiographical play 'Kuch Bhi Ho Sakta Hai' on his website
4 hours ago
Shraddha Kapoor shares a funny 'Stree' style poster that shows how to keep COVID at bay
6 hours ago
Kriti Sanon gets poetic with random thoughts amid lockdown, calls herself 'old soul'
5 hours ago
Deepika Padukone shares family's WhatsApp chat, this is how she has saved Ranveer's number