Amid reports that Sushant Singh Rajput's Instagram was still being operated, Ranvir Shorey expressed his delight that all 'rumours' were laid to rest

Is Sushant Singh Rajput’s Instagram account still being operated after his death? There has been some mystery surrounding this, after netizens and even Bharatiya Janata Party Member of Parliament Roopa Ganguly had raised questions. One of the other names to have termed it ‘creepy if true’ was Ranvir Shorey.

The actor had earlier reacted to an alleged post about Sushant’s account following a celebrity and even tagged Mumbai Police to get into the depth of it. The Sacred Games 2 star, however, was relieved after Sushant’s family released a statement, making numerous decisions and announcements related to Sushant. Apart from sharing that they would be launching a foundation in his name to help young talents in cinema, science and sports, and converting his childhood home into a memorial for Sushant, one of the other points was that they will continue to maintain his social media pages to keep his memories alive.

Reacting to the statement, Sushant’s Sonchiriya co-star Ranvir expressed his relief that the statement ‘lays to rest’ ‘concerns or rumours’ regarding his social media accounts. The actor also shared a message for Sushant's ‘grief and anger stricken fans’ and hoped they’d find the ‘peace and quiet’ that the tragedy deserved.

This statement from @itsSSR’s family lays to rest any concerns or rumours about his social media accounts.
I hope now his grief and anger stricken fans will find the peace and quiet that this tragedy deserves. ðŸ™ðŸ½ https://t.co/di4gQsxtxG

Netizens had earlier claimed that their comments on Sushant’s posts were being deleted. Roopa Ganguly claimed that the number of accounts Sushant was following was decreasing. The actor-politician had also demanded a CBI probe into the case.

I am quite shocked at what I have just heard and then seen myself
Is anyone operating Sushant's phone?
How is his Instagram account unfollowing people "he" followed?
CBI 's presence isn't required ?#cbiforsushant #roopaganguly @AmitShah @narendramodi pic.twitter.com/Autr6urJ5u 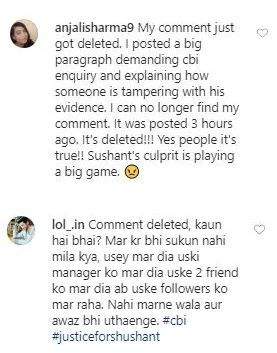 Meanwhile, the Mumbai Police, that is investigating the case, ruled out foul play in the death that occurred on June 14. Citing the post-mortem, they termed the death due to ‘asyphxia due to hanging’. They have also questioned 25 persons in connection with the case, including rumoured girlfriend Rhea Chakraborty and Dil Bechara director Mukesh Chhabra, managers, family and those connected with Yash Raj Films.