It seems like love was in the air at the recently held Golden Globe 2020 Awards, as many celebrities like Beyonce-Jay Z and Priyanka Chopra-Nick Jonas were spotted spending 'quality time' with each other. The much-talked-about after party of the Golden Globe 2020 Awards ceremony also witnessed the rumoured couple Taylor Swift and Joe Alwyn sharing several 'intimate' moments with each other, which sent the internet into a frenzy. Here are the details:

With billions of people using social media every day, several things go viral on the internet for good reasons. From BTS pictures to well-guarded film announcements, fans of Hollywood celebrities enjoy a wide range of content on the internet.

Recently, several pictures from the after party of the Golden Globe Awards 2020 went viral.

As seen in one of the viral pictures, Taylor Swift can be seen wrapping her arms around Joe Alwyn and sharing a quick lip-lock with him. As per several reports, Taylor Swift and Joe Alwyn had a great time in each other’s company and were seen kissing multiple times.

Although Taylor is no stranger to rumours, it seems like the singer is keeping her rumoured relationship with Joe Alwyn out of the public eye for good reason. Take a look at the viral picture: 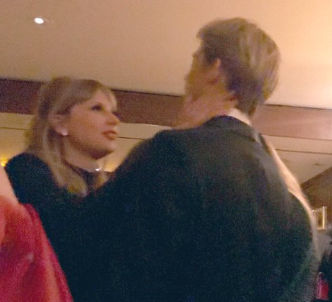 We didn't won but we have #JoeAlwyn and #TaylorSwift content so we're not losers as well. ðŸ˜ðŸ˜ðŸ¤·‍â™€ï¸ðŸ¤·‍â™€ï¸ pic.twitter.com/2EJXOfcemU

ðŸ“· | Taylor Swift and Joe Alwyn at the CAA #GoldenGlobes after party pic.twitter.com/foIg6BoMYZ

ðŸ“¸ | Taylor Swift and Joe Alwyn seated together at the 2020 #GoldenGlobes! pic.twitter.com/FeLsj3RvW1

What did Taylor Swift opt for the Golden Globes?

For the Golden Globes Awards 2020 ceremony, Taylor Swift opted for a blue and yellow giant floral dress, which was designed by Etro. The singer accessorized her look minimally, wearing dangle earrings.

Also Read | Taylor Swift And Joe Alwyn Can Not Get Enough Of Each Other At Golden Globes; See Pics

WE RECOMMEND
5 months ago
Justin Bieber, Hailey Baldwin spotted with Scooter Braun amidst Taylor Swift clash
5 months ago
Songs written by Taylor Swift for other artists that you must listen to
5 months ago
Jennifer Lopez to Taylor Swift, here are the choicest holiday looks inspired by Hollywood
4 months ago
Taylor Swift and Joe Alwyn can not get enough of each other at Golden Globes; see pics