Tiger Shroff Is All Praise For Disha Patani's New Song, 'Humraah' From 'Malang'

Tiger Shroff recently took to his Instagram stories and praised a song from Malang titled Humraah which features Disha Patani. Read below for more details.

Promotions for Disha Patani and Aditya Roy Kapur starrer Malang have reportedly created a lot of buzz for the film. The crime-thriller film's trailer was released back on January 6 2020 and garnered 30 million views under a week on YouTube. Malang's latest track Humraah was unveiled today i.e 23 January 2020 and netizens are reportedly praising Disha Patani and Aditya Roy Kapur's onscreen chemistry in the film. Now, Disha Patani's rumoured boyfriend Tiger Shroff has also praised the Humraah song from Malang.

Also read: Tiger Shroff flips over a car in a BTS picture from 'War'; check it out

Tiger Shroff took to his Instagram stories and shared that he loved the Humraah song from Malang. The story was later reported by Disha Patani on her Instagram. The music video features Disha Patani helping Aditya Roy Kapur get over his fear of heights by jumping into the deep ocean from a cliff. The music video also showcased a glimpse of Elli AvrRam's character in Malang. Check out Tiger Shroff's Instagram story praising Humraah song from Malang and Disha Patani's adorable reply below - 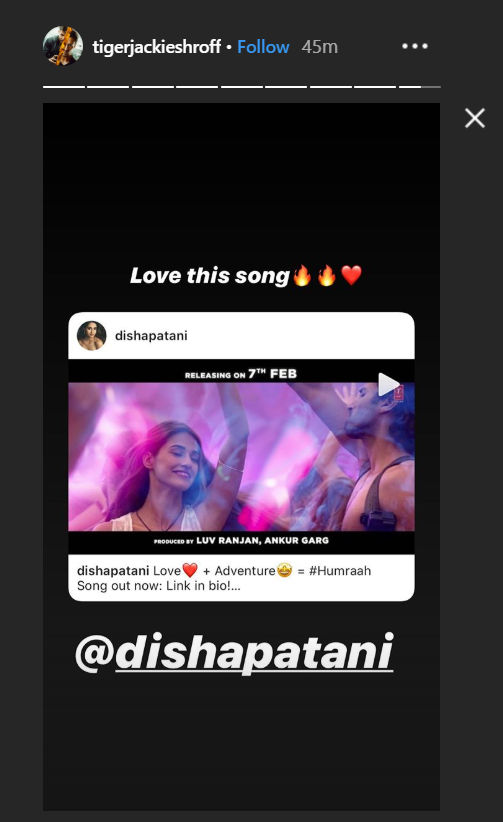 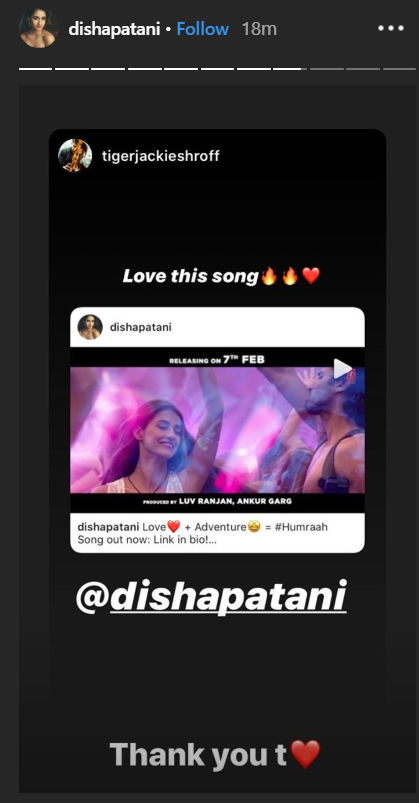 Malang is directed by Mohit Suri who has previously helmed films like Aashiqui 2, Ek Villain and Half Girlfriend. The film features an extended cast of Aditya Roy Kapur, Disha Patni, Anil Kapoor and Kunal Kemmu in pivotal roles. Malang is all set to release on February 7, 2020.