Tiger Shroff recently uploaded a video to show his excitement for his latest song release. Read on to know how Disha Patani reacted to it.

Tiger Shroff is all geared up for his latest movie, Baaghi 3's release. The actor will be seen in the film alongside Shraddha Kapoor.  The moviemakers had recently dropped the latest track of the movie and it received an overwhelming response from their fans. Once the track released, Tiger Shroff took to his Instagram account where he shared a video of himself working out to show his excitement for the release of Baaghi 3’s song.

Read | Disha Patani To Be Paired Next To Aditya Roy Kapur In Mohit Suri's 'Ek Villain 2'?

Tiger is often seen sharing his work out videos on social media. But the one recently shared by him has been getting a lot of attention from his fans. In fact, rumoured girlfriend Disha Patani and her sister Khushboo Patani could not stop themselves from expressing how they liked the video. Disha Patani liked the video soon after he uploaded it.

The video shared by tiger Shroff shows him acing a backflip. The actor filmed the video on a loop mode which showed him doing backflips continuously. Tiger is seen wearing a black coloured vest and has matched it with a pair of black track pants. The actor captioned it saying that he was going Bhankas that day, refereeing to the title of the song. Check out the video below. 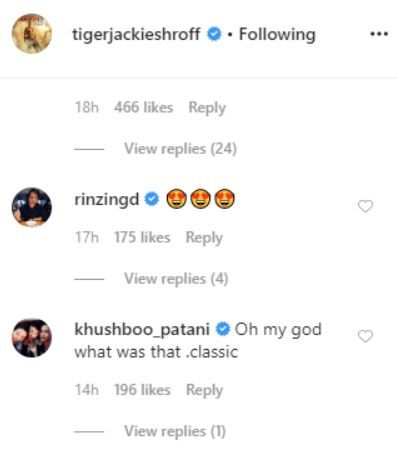 Tiger Shroff can be seen leaving no stone unturned to promote his upcoming film. Baaghi 3 is the third instalment in the Baaghi series. The movie is scheduled to release on March 6th, 2020. Check out some other Tiger Shroff videos from his social media account.

PEOPLE HAVE PLEDGED SO FAR
Priyanka Chopra defends beauty pageants, says it gave her confidence
Kajol celebrates 22 years of 'Pyaar Kiya Toh Darna Kya' with a GIF | Watch it here
Deepika Padukone's latest quarantine series is a must watch during the COVID-19 lockdown
'This could be a potential bio-war', says Kangana Ranaut as she talks about coronavirus
Katrina Kaif's 'Life Under Quarantine' series will teach you how to be productive; Watch
DO NOT MISS
TRUMP IGNORES SOCIAL DISTANCING
HEALTH MINISTRY BRIEFING ON COVID
PUTIN'S YELLOW HAZMAT SUIT
RAMDAS ATHWALE DAY 4 OF LOCKDOWN
DELHI GOVT DISTRIBUTES RATION
GOOGLE'S 3D ANIMAL FEATURE