Tiger Shroff recently took to his Instagram stories and shares a short-video along with Tara Sutaria and Ananya Panday as 'SOTY2' completes a year.

Student of the Year 2 celebrated one year since its release yesterday i.e May 10, 2020. The film released last year and became a successful launch for Tatra Sutaria and Ananya Panday while becoming yet another hit film under Tiger Shroff's kitty. On account of the film's one year anniversary, actor Tiger Shroff took to his Instagram stories and posted a funny post along with Ananya Panday and Tara Sutaria. Check it out below - 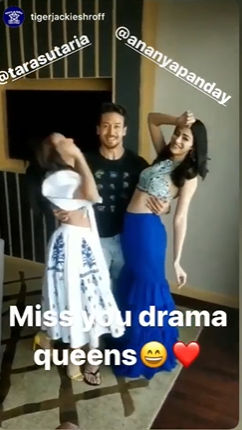 On the other hand, Ananya Panday also took to her social media and posted a number of photos from Student of the Year 2 days. In the post, Ananya Panday thanked director Punit Malhotra, producer Karan Johar and Tiger Shroff along with the entire cast and acres of the film for making it an unforgettable experience for her. Ananya also thanked her fans for supporting her and the film. Check it out below -

1 year of SOTY 2 today!! ðŸ¥³ This also marks my first year in the industry â¤ï¸ here are a few of my firsts ðŸ˜Š Forever grateful and blessed to have received so much love from all of you â¤ï¸ (1/2) pic.twitter.com/dv6ImNFWM1

Also read: Tiger Shroff's fans aka 'Tigerians' are ever so grateful to him for inspiring them; Watch