'To Know You Is To Love You': Ekta Kapoor Wishes Tusshar On His B'day With Adorable Video

Ekta Kapoor shared an adorable video on Instagram while extending her birthday wishes to brother and actor Tusshar Kapoor who turned 44 on November 20.

TV Czarina Ekta Kapoor shared an adorable video on Instagram while extending her birthday wishes to brother and actor Tusshar Kapoor who turned 44 on November 20. In the video, Tusshar can be seen enjoying some playful moments with Ekta’s son Ravie. While wishing her brother on the special day, Ekta expressed her love for the actor and wrote, “To know u is to love u!.”

The video starts with Tusshar making some super funny faces with Ravie as he talks to the actress Neelam Kothari. Neelam on the other hand asks Ravie to dance and jump, while Tusshar also seemed to enjoy every moment with him. Apart from Tusshar his Kya Kool Hai Hum actor Riteish Deshmukh was also present and he can be seen playing with the little one too. Riteish was also spotted making faces and dancing with Ravie in order to make him laugh. While blessing Tusshar with immense success and happiness in life, Ekta wrote, “I love u tush may u get all u want in life !!” Yuvika Chaudhary was the first one to comment under the post and wrote, “Awesome.” Followed by Yuvika was actress Anjana Sukhani who wrote, “aweee God Bless.” 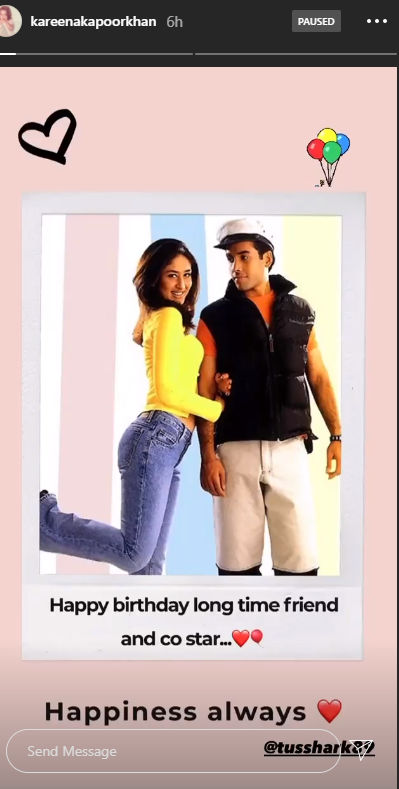 The actor who is known for his work in films like Mujhe Kucch Kehna Hai (2001), Khakee (2004), Kyaa Kool Hai Hum (2005), Dhol (2007), Shootout at Wadala (2013), and the Golmaal film series, is the founder and director of a production house called Tusshar Entertainment House. He recently produced his debut movie Laxxmi under his production house. Earlier, he used to co-own Balaji Telefilms and Balaji Motion Pictures from 2001-2019

Tusshar Kapoor, who is not that active on social media mostly shares videos of his fitness regime while hitting the gym in his free time. Meanwhile, on the work front, Tusshar Kapoor was seen producing the film Laxmmi. The movie stars Akshay Kumar, Kiara Advani, Sharad Kelkar, and others. Tusshar has produced the Akshay Kumar starrer movie. The movie which was earlier named Laxmmi Bomb and was released on streaming directly on Disney+ Hotstar on November 9th.

Read: On Tusshar Kapoor's Birthday, Here Is An Unseen Picture Of The Actor With Father Jeetendra

Read: Tusshar Kapoor Quiz: Check Out How Well You Know The Actor On His 44th B'day

WE RECOMMEND
3 days ago
Tusshar Kapoor quiz: Check out how well you know the actor on his 44th b'day
5 days ago
Tusshar Kapoor says "stay fit don't quit" in his latest home workout video
2 weeks ago
Ekta Kapoor feels nostalgic about her 'thinner days', shares throwback picture on Insta
3 weeks ago
Ekta Kapoor shares a picture with her son Ravie Kapoor, calls him a 'catch'
3 weeks ago
Unseen Pic of the day: When baby Ekta Kapoor had her eyes on brother's birthday cake