Twinkle Khanna Pens B'day Wishes For Son Aarav, Says 'proud Of The Man You Have Become'

Making the day extra special for her son, Twinkle Khanna shared a beautiful picture with her Aarav and penned a lengthy note to wish him on his birthday. 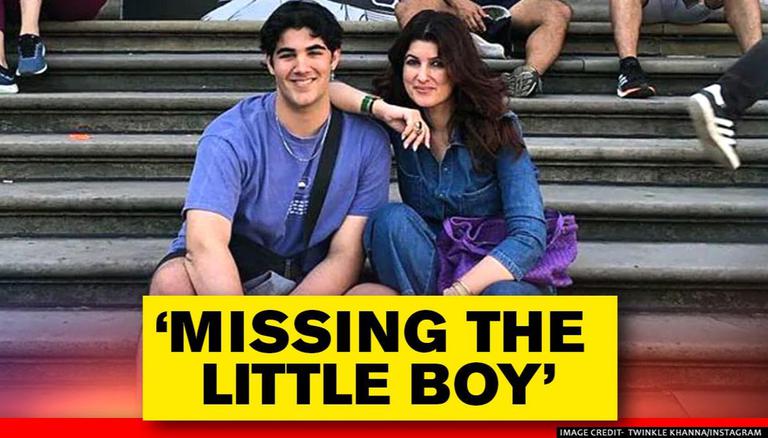 Bollywood’s Khiladi Akshay Kumar and writer Twinkle Khanna’s son Aarav ringed in his 18th birthday on September 15. Making the day extra special for the young lad, Twinkle Khanna shared a beautiful picture from the celebrations which seem to be from the last night. Apart from the picture, Twinkle also penned a lengthy note for her son which she wrote to explain her son about the time she "loosen the strings" as her son has now grown into a man.

In the pictures, Twinkle Khanna, Akshay Kumar their children Nitara, Aarav, and other family members can be seen striking a pose together from the celebrations. Surprisingly, adding humour to the post, everyone in the pictures can be seen donning a moustache of different shapes and sizes which will just leave her fans in splits. While penning her wishes for her son, the actress wrote that all these years her son has been as much her teacher as Twinkle has been his. She further explained that she has learned optimism, kindness, and wonder from Aarav as she taught him maths, a few manners, and how to switch the lights off when he leaves the room.

Read: Twinkle Khanna Calls Herself 'rainbow Girl' As She Spots Rainbow For Second Time This Week

Adding, the Mela actress further wrote that looking at her son growing up and listening to him repeatedly telling about his independence, she has realized that when her son will finally leave her home, her world and will step into his own, her lights will go off automatically and her world will be filled with a bleak darkness. At last, the actress concluded the post and wrote that she has started to miss the little boy who he was and she is proud of the man he has become now with his 18th birthday.

Actress Tisca Chopra was the first one to pour in her love for the amazing picture and called it “delightful”. Apart from the actress, several other fans of the actress hailed her for the beautiful words that she has penned for her little boy. One of the users wrote, “beautifully expressed,” while another wrote, “So beautifully written.” A third user chimed in and commented “moonch ki dukaan.” Another user echoed similar sentiments and poured in his heart and love for the beautifully knitted caption. Read: When Twinkle Khanna Put A Condition To Akshay Before The Birth Of The Second Child

Read: Twinkle Khanna Reacts To 'Why Is Akshay Kumar's Wife Not A Big Star' Hilarious Meme