Unseen Pic Of The Day: Deepika Reveals Her Favourite Person And It's Not Ranveer Singh

Deepika Padukone's throwback picture of hugging her 'favourite person' Irrfan Khan has been going viral all over social media and making them emotional.

It is not a hidden fact that Deepika Padukone is adored by her fans and the members of the film fraternity not only because of her impeccable acting chops but also due to her jovial nature. Deepika Padukone never fails to make her near and dear ones feel special. This unseen throwback video of Deepika Padukone is just the proof of that. The video has Deepika Padukone breaking into an impromptu hug with her Piku co-star and her close friend, the late actor Irrfan Khan.

The video of Deepika Padukone and Irrfan Khan will make their fan teary-eyed as the video has started going viral after Irrfan's unfortunate demise owing to neuroendocrine cancer on April 29, 2020. Take a look at a still from Deepika Padukone's video with Irrfan Khan.

Also Read: Deepika Padukone And Ranveer Singh's Dance Videos Will Take Away All Your Mid-week Blues 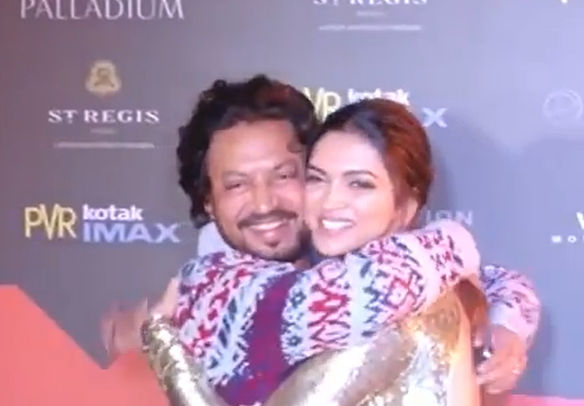 Irrfan Khan's demise left the entire nation in a state of shock and despair. Deepika Padukone somehow expressed what everyone has been feeling in the most powerful yet simple way. The Padmaavat actor shared a blank black image along with the emoticon for a broken heart as she mourned the loss of the actor on Wednesday. Take a look at Deepika Padukone's post.

Deepika Padukone and Irrfan Khan's Piku director Shoojit Sircar broke the news of the actor's death around noon on April 29, 2020, Wednesday. Sircar also expressed his condolences to Irrfan's family and paid a heartfelt tribute to the actor through his tweet. Shoojit also called Irrfan a fighter and stated that he is proud of him. Take a look at the Piku director's tweet.

My dear friend Irfaan. You fought and fought and fought. I will always be proud of you.. we shall meet again.. condolences to Sutapa and Babil.. you too fought, Sutapa you gave everything possible in this fight. Peace and Om shanti. Irfaan Khan salute.

Irrfan Khan played the role of the cool-tempered and witty Rana Chaudhary in the 2015 film Piku who gets stuck between Deepika Padukone's short-tempered Piku and her ageing and eccentric father, Amitabh Bachchan's Bhashkor. The film also starred Mousoumi Chatterjee in a pivotal role. It was well-received from the critics and the movie-goers.