Varun Dhawan recently praised 'Paatal Lok' which is produced by Anushka Sharma under her production company. Read more to know what the actor had to say.

Street Dancer 3 actor Varun Dhawan is all hearts for Anushka Sharma in his Instagram story. Sharma had posted about Paatal Lok, her upcoming project, on her social media handle, as she is one of the producers of this series. Read on to know more about what Dhawan has to say:

Varun Dhawan is all praises for Anushka Sharma

Varun Dhawan posted a photo of the same poster in his IG story section. He captioned it saying, “This looks super cool @anushkasharma proud of yaaa producer saheb." This suggests that the show is produced by Sharma. It is produced under the banner of Clean Slate Filmz Private Limited. Here is the story by Dhawan. 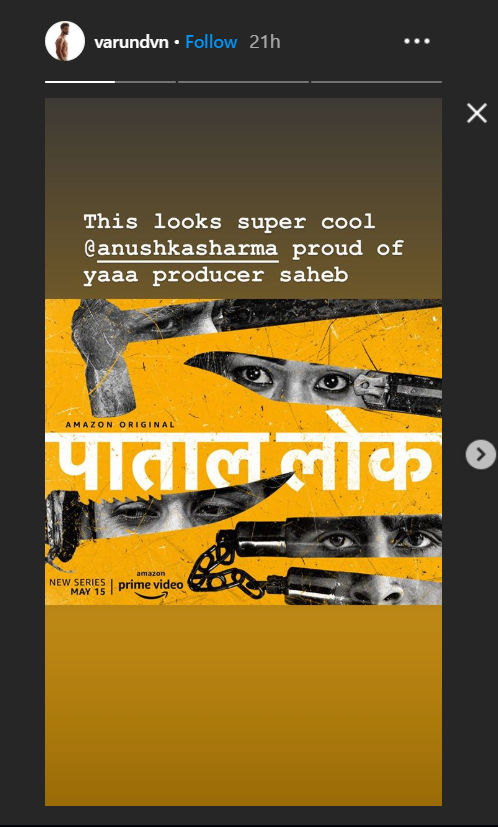 On the work front, Varun Dhawan is set for the release of Coolie No.1. It is directed by David Dhawan and will also feature Sara Ali Khan. It is a remake of the original Coolie No.1 which featured Govinda in the lead. Fans of the Badlapur actor are eagerly waiting for the release of the film in the theatre. It is currently in the post-production phase.

ALSO READ | Mahabharat: Shaheer Sheikh Opens Up About Scene That Emotionally Disturbed Him For Weeks

PEOPLE HAVE PLEDGED SO FAR
LATEST NEWS
View all
12 mins ago
Sarika's birthday: Sarika and Kamal Haasan's films that fans must watch
51 mins ago
Amitabh Bachchan's movies with Manoj Bajpayee; From 'Aks' to 'Sarkar 3'
22 mins ago
Disha Patani and Tiger Shroff share sweet birthday wishes for their Parkour trainer
31 mins ago
Taapsee Pannu or Rakul Preet Singh might essay Karnam Malleswari in her biopic?
29 mins ago
Sonakshi Sinha talks about low-key birthday celebration, says she loved the family affair