Vicky Kaushal recently took to his Instagram and shared a video of him taking horse-riding lessons. Fans were quick to point a resemblance to another star.

Vicky Kaushal is currently busy preparing for his upcoming film Takht which is all set to be a multi-starrer magnum opus. Vicky will be reportedly seen essaying the role of Aurangzeb in the historic drama film. Now, the Masaan actor was seen taking horse-riding lessons for the film. 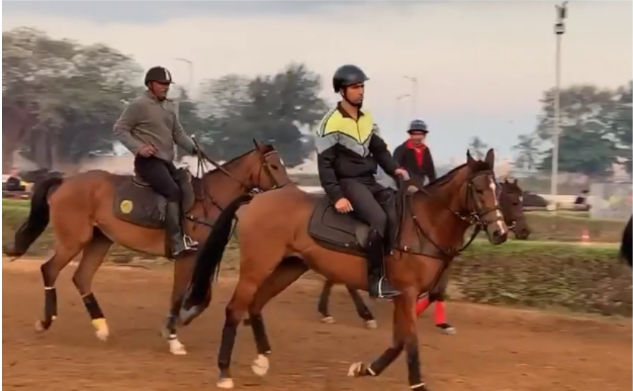 The actor recently took to his Instagram and shared a video of him riding a horse. Though the actor was visibly seen gearing his serious mode on and focusing on riding the horse with precision, fans were quick to make a comparison of Vicky Kaushal and the iconic funny horse-riding scene in Welcome featuring Nana Patekar. Check out the video below -

Earlier, Vicky Kaushal had revealed that the shooting for Takht will begin in February 2020. He revealed to a news daily that the preparations for Takht are in full force at the moment. He is excited to feature in a film with such a huge star cast and is looking forward to seeing how all the actors of the film act in one frame. Though the film was expected to hit the silver screen in 2020, it has been reportedly postponed as the film will require heavy post-production after the principal photography has wrapped up.

Takht will showcase the story of Mughal Emperor Aurangzeb and his brother Dara Shukoh. The film will feature an extensive star cast of Ranveer Singh as Dara Shukoh, Anil Kapoor as Shah Jahan, Alia Bhatt as Dilras Banu and Kareena Kapoor as Jahanara Begum along with Vicky Kaushal as Aurangzeb. Bhumi Pednekar and Jahnvi Kapoor are also speculated to be a part of the film.