Vicky Kaushal Thanks Fans & Reflects On 'quarantine Birthday'; Says It's 'worth The Hype'

Bollywood heartthrob Vicky Kaushal celebrated his 32nd birthday at home on Saturday. He took to Instagram and thanked his fans for making it a memorable one.

Bollywood actor Vicky Kaushal took to Instagram on Sunday and elected on the unique birthday experience that he had amid lockdown as he celebrated his birthday on Saturday indoors and with family. The actor shared a heartfelt note in which he wrote that he will always remember this birthday as he quipped that not doing the dishes for a day made him feel like a king. He also shared that he was thankful to his fans who made him feel special through their wishes and kind gestures for him on his special day.

Many of his friends and colleagues from the film fraternity showered their love and blessings on the birthday boy on Saturday through their Instagram posts and story updates. However, it was his rumoured girlfriend and Jab Tak Hai Jaan actor Katrina Kaif's sweet wish for him that grabbed netizens' attention. She posted a caricature of Vicky Kaushal's character from his 2018 film Uri: The Surgical Strike as a rocket  and wrote, “May the josh always be high. Happy birthday.”. Vicky promptly replied saying, 'Thank you' and used Katrina's popular Kay Beauty GIF along with it. 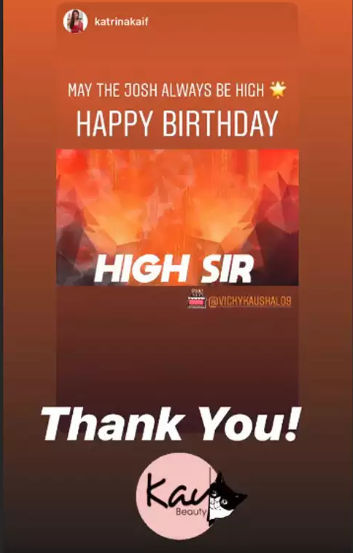 Vicky Kaushal rose to fame with his performance as Iqbal Syed in Raazi (2018) opposite Alia Bhatt. He later made headlines for his supporting role as Kamlesh ‘Kamli’ Kanhaiyalal Kapasai in Sanju (2018) along with Ranbir Kapoor. Vicky’s act as Major Vihaan Singh Shergill in Uri: The Surgical Strike (2019) earned him his first-ever National Award for Best Actor.

Vicky Kaushal is also set to star in the biopic of Sam Manekshaw, who was the Chief of the Army Staff of the Indian Army during the Indo-Pakistani War of 1971. Directed by Meghna Gulzar, the film also stars Manoj Bajpayee. He will also reunite with his Uri director Aditya Dhar for The Immortal Ashwatthama and will also be a part of the historic drama film Takht. Kaushal will be saying the role of Aurangzeb and Ranveer Singh will be seen playing the character of Dara Shikoh.

PEOPLE HAVE PLEDGED SO FAR
LATEST NEWS
View all
7 hours ago
Hardik & Natasa announce pregnancy, Sonu Sood called 'Indian of the Year' & more
7 hours ago
Unseen pic of the day: Sara Ali Khan is busy with her phone as Imtiaz Ali looks on
11 hours ago
Sanjay Dutt expresses love for mom Nargis in lovely tribute on her 91st birth anniversary
8 hours ago
Amitabh Bachchan shares heart-wrenching video showing plight of transgenders amid COVID-19
8 hours ago
Huma Qureshi feels 'tops of the pops' with 108 Suryanamaskars, shares way to make money